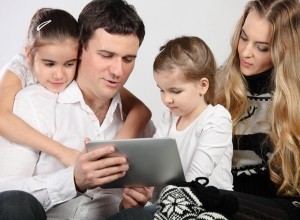 Now, parents will be able to entertain their offspring with a tablet computer made just for children.

When many of us were children, we had to content ourselves with toys and books for our entertainment. Today’s generation of kids also has toys, but they are a bit more high-tech than matchbox cars and dolls.

Now, parents will be able to entertain their offspring with a tablet computer made just for children. Toys R Us said it will sell the Tabeo for $150 in its stores starting October 21, although the company has been taking pre-orders since September 10. The seven-inch tablet, running Google’s Android operating system, includes Wi-Fi connectivity and 50 pre-loaded applications, with an additional 7,000 free apps available, according to CNNMoney.

Tabeo is no ordinary tablet, as it includes features specifically designed for youngsters. The device is framed by a plastic case to protect it in the case of falls. In addition, the tablet includes application control software to help parents monitor their child’s use of the Tabeo. Adults can block access to specific types of websites, and they can also limit the times in which the mobile device can be used. If kids get past the layered security, then the parents receive an email alerting them of the breach, CNNMoney reported.

“Toys R Us’ Tabeo appears to offer great value, but the challenge with Tabeo will be keeping the product from occupying an awkward middle ground – not quite cool enough to get people to spend the money, but not cheap enough to be an impulse purchase,” Sean McGowan, an analyst with Needham & Co, said to The Associated Press.

Children and mobile device usage
Tabeo is not the first tablet designed to be used by children, as CNNMoney noted that VTech’s InnoTab, Oregon Scientific’s Meep and LeapFrog’s LeapPad are all currently available kid-friendly mobile devices.

The proliferation of child-specific tablets is indicative of a broader trend. Mashable reported on statistics compiled by MDG Advertising that found that 52 percent of 5- to 8-year-olds and 39 percent of 2- to 4-year-olds have a smart device. In fact, 10 percent are now using smart technology in their first year of life.

Tablets, in particular, have become increasingly popular with children. About 70 percent of all kids under 12 are already using a tablet, and 44 percent of 6- to 12-year-olds said they wanted an iPad for Christmas last year, MGD reported.

Would you buy the Tabeo for a child? At what age should children start using tablets? Leave your comments below to let us know your opinions!