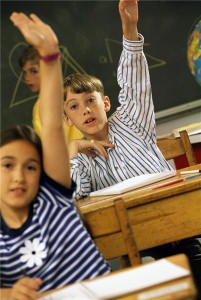 Kids in low income situations may end up benefiting from technology in classrooms.

It’s always a challenge to figure out which classroom software and classroom management techniques will work best to capture students’ interest and keep them enthralled throughout a school year. KQED, a public media station in northern California, spoke with Portland, Oregon, elementary school teacher Scha Luria, who started trying out the technique known as flipping the classroom to get low-income students interested and up to speed by sending them home with online video instruction, DVDs and more. The students use the technology to learn at home and then get help with “homework” while at school.

“So far, the strategy is showing signs of success,” the KQED blog said. “She uses class time to tailor instruction to students who started the school year behind their classmates in reading and math, and she has seen rapid improvement. By the end of the school year, she said, her students have averaged two years’ worth of progress in math, for example.”

Luria told KQED that flipping the classroom has been powerful, and said she finally feels like she’s able to get more time with students and bring them to where they should be in the learning process. While some teachers have rejected the idea of using classroom technology at home and doing homework in class, others have also testified to the power of a flipped classroom. Greg Green, principal of Clintondale High School in Clinton Township in Michigan, told the blog that he believes it can be used to give “unprecedented one-on-one time” to students.

Classroom technology useful even for preschoolers

Spotlight, a new source that covers technology and education, spoke with Rosalie Moran, curriculum director for two Head Start centers based in Harlem and the Bronx, who said they have children who can operate a computer, read well and have a great vocabulary, but they also have children who need a lot of help, even as early as in preschool. The school participated in a study that looked at 398 children in 80 preschool classrooms, and it found that media-rich curriculum correlated with increases in sounds associated with letters, basic learning concepts and recognition of words and letters.

“The reason it worked is that we had at our disposal high-quality media content,” said Shelley Pasnik, director of the Center for Children and Technology at the Education Development Center in New York City, who authored this study. “We placed an emphasis on high-quality media and professional development for educators.”

Moran told Spotlight that with this study, the teacher viewed shows like “Between the Lions” and “Sesame Street” with the kids and interacted with the students at the same time. Teachers allowed kids to ask questions by pausing the video at certain points, which allowed many of the students to slow down and get a better idea of what was happening.

In order for the flipped classroom to work, an article by Wired.com stated, there needs to be more than just video lecutres. Video lectures can lead to less engaged students, so there definitely needs to be a strong teacher presence when these students are doing their work in class, and the videos need to be as interesting as they possibly can be.

Andrew Miller, an education consultant, told Wired that he believes teachers flipping their classrooms really need to focus on engagement and how much students are retaining. Only 10 percent of what humans learn is retained via reading and only 20 percent of what is heard is retained, the news source said, but we comprehend 90 percent of what we say and do. This is an important aspect of any classroom, but especially one that extensively uses classroom technology.

How do you think students can be engaged in a flipped classroom? Do you think this is a good way to learn? Let us know!