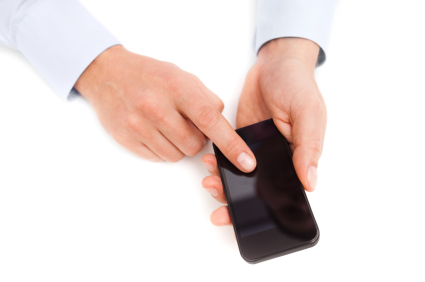 Texting without looking? On an iPhone??? Whoa! There’ll be an app for that, soon enough. Researchers have built a prototype incorporating braille that allows users to text without looking. The free, open-source app is called BrailleTouch. It brings texting capabilities to the visually impaired.

Preliminary studies show that users can type at least six times the number of words per minute compared to other eyes-free texting prototypes. Users reached speeds of up to 32 words per minute with 92% accuracy.  A more detailed study is underway to evaluate BrailleTouch further.

But the app can be used by those who can see too. According to Mario Romero, “BrailleTouch is an out-of-the-box solution that will work with smartphones and tablets and allow users to start learning the Braille alphabet in a few minutes. It also reduces the need for expensive proprietary Braille keyboard devices, which typically cost thousands of dollars.”

The app turns the iPhone’s touchscreen into a soft-touch keyboard programmed for Braille and requiring only six keys. It’s perfect for the limited real estate on smartphones. Users hold the device with the screen facing away and type with three fingers on each hand. It’s identical to typing Braille on a standard keyboard. They’ve already developed iPhone and iPad versions and they’re working on an Android version.

It’s great news. Soon you just might be able to text while walking down the sidewalk without tripping over the cracks. Or maybe you can send a text about the great movie you’re watching without missing a beat. But remember, it’s still dangerous to text while driving, whether you have to look at the screen or not.

Maureen is one of the friendly voices you will hear if you call Faronics Customer Service. She enjoys reading and writing as well as listening to audiobooks on her iPod. Maureen has been using computers since the olden days, before there were PC’s.