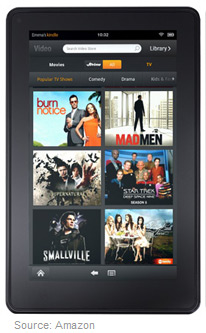 Amazon announced its new Kindle Fire today. I honestly didn’t see this one coming. Many are already crying out “iPad Killer,” saying this is finally a product to give Apple a run for its money. Could this be true?

It’s got color, it’s got touch, it can play games and movies and the best part is that it’s only $199! It’s been awhile since I’ve been in Math class, but last time I checked $199 was a lot less than $519. The HP Touchpad found great success with its last breath due to a massive price cut. Enough success to prompt one last production run.

The Kindle has always been famous for one thing—being an awesome eBook reader. Sure the iPad can do all sorts of great things, it even made its own market. Many have been thinking iPads will start replacing text books in the classroom in the near future. The arrival of a tablet known for being a great eBook reader and that can play media could shake things up a bit. Especially because of the price. You can get two for the price of one!

The Kindle Fire will run on the Android OS. Not that there’s anything wrong with that. But Android has been known for being the main target of mobile malware.

At this point it’s too early to start predicting who will be crowned champion in an iPad vs. Kindle Fire UFC match. What I am more curious about is how Microsoft will react. They were set to steal some iPad thunder with Windows 8 and take the reins with low cost tablets running the new OS. With the Kindle Fire, it could be Microsoft that gets a run for its money instead!

Will the Kindle Fire sway you from buying an iPad? Can you see Amazon taking a big chunk out of Apple’s market share, especially in the classroom?