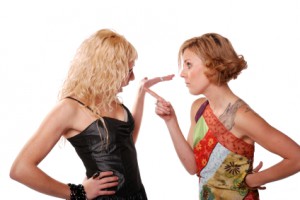 Facebook has enjoyed a steady stream of positivity with niceties like friending people, poking people, and liking things. Despite the outcry for a dislike button, Facebook refuses to budge. It’s actually outlawed in their developer terms. It’s deemed far too negative. So what do you do when someone makes your blacklist? Well you can defriend people. More than half a billion people were defriended in 2011. But now there’s another option.

You can build a list of your enemies! That’s right. It’s clearly not a Facebook standard feature, but it is a new app built by professor Dean Terry. The app is called EnemyGraph and it allows you to select people, places, and apps as your enemies. There’s also a nifty dissonance report that notifies you when your friends make one of your enemies one of theirs.

His theory is that people are also connected by their differences and in this case, the things they dislike can bring them together. And it must be true considering that over 10,000 people have already signed up for the app. So who’s the number one enemy? Politician Rick Santorum with 307 self-declared enemies, which beats out Justin Bieber at 305 and the Twilight series at 124. So what does it mean to be an enemy? Well it doesn’t translate literally, just like the term ‘Friend’ doesn’t always translate literally.

Ok, but what does this mean for cyber bullying? Not much. The good news is that you can’t list anyone as an enemy unless you’re friends with them first or they are a public figure. And who knows? By confronting your differences, you just might learn a thing or two. As George Washington once said, “It is at all times more easy to make enemies than friends.” So get it while you still can… before Facebook decides to shut it down.