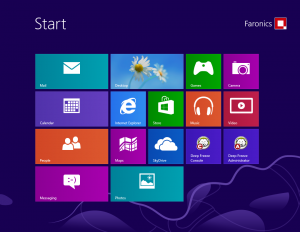 The long anticipation is over – Microsoft launched Windows 8 and the Surface tablet on Friday, October 26th. Microsoft is now poised to compete in the growing mobile market space and believes that Windows 8 will transform the user experience with its new “Metro” Start screen designed for touch interfaces.

During the past four months, our Deep Freeze team has been working with Microsoft to prepare for the launch of Windows 8. We wanted to support our customers who were ready to migrate soon after the launch. We were also approached by some of our global customers who wanted to showcase Windows 8 during the launch and “Freeze” their desired settings to guarantee a standardized experience to their end-users upon every restart. As Deep Freeze is a Kernal-mode driver, we made several enhancements to ensure compatibility with both Windows 8 and Windows Server 2012.

Microsoft’s foray into the tablet market brings Deep Freeze closer to supporting these devices. At this time, Deep Freeze will protect Intel-based tablets running Windows 8 but not Windows RT. If you are ready to migrate to Windows 8, join our Deep Freeze Beta Program for Free!