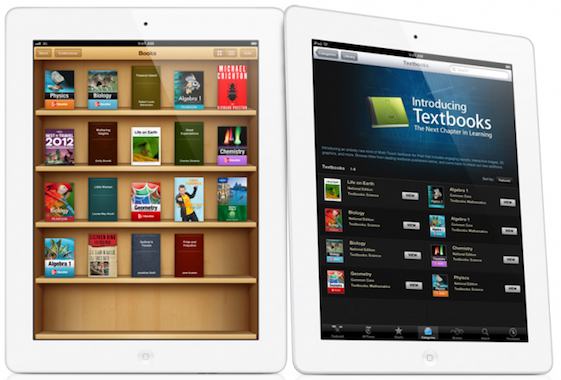 It was only a matter of time after the iPad was released that I expected to hear news that it would revolutionize the textbook industry. While it took a little longer than I had thought, that day finally came last week. Apple announced iBooks 2, iBooks Author and iTunes U—apps that will take textbooks to the next level—the digital world. Three days later, 350,000 digital textbooks were already sold. Looks like an A+ for Apple!

When I had to buy textbooks in University, the latest editions were required. New textbooks could easily cost an average of $100 each. Buying used textbooks saved some cash when possible, but older editions might be missing important captions, facts, or in most cases just a few commas in the right place. Way to waste some trees…

These newly announced digital textbooks on the other hand are great for the environment. Books come from key publishers like McGraw-Hill, along with a price tag of only $14.99 (or less). Last time I checked $15 was a lot less than $100. You get all the content of regular books, plus access to video, audio, and all sorts of interactive media. Who wants to carry around stacks of heavy books anyways when carrying one device gives you access to all of them (plus more) with no added weight?

For those of you that like to scribble notes in the margins and highlight important sections, you still can. Digital textbooks allow you to do all of that. For those who like smelling the real paper, well, you’re out of luck. The small price you pay for innovation.

While these latest apps and the sales that followed is nothing short of amazing, there are still a lot of questions that need to be asked before we start seeing iPads in the hands of every student.

► Who will be responsible for buying the iPads? The students? The school? iPads aren’t cheap. Maybe the schools could subsidize part of the cost into enrollment, the same way cell companies do when doling out 3 year contracts for iPhones.

► What if some students can’t afford one? Can a classroom work if not everyone is using iPads? Those without would find themselves at a pretty big disadvantage.

► If it’s a “bring your own device” setup, who will maintain the devices? What if something goes wrong? Who would fix it?

► How do you monitor your class when everyone is using iPads? Who’s to say they are reading and not playing Angry Birds? The list goes on.

The first step has been made though, and Apple made a great move getting its foot in the door first. The same way that desktop computers aren’t going anywhere despite a red hot market for mobile, I can’t see textbooks disappearing any time soon just because digital versions are here. But when they do, I’m pretty excited at the possibilities. I almost wish I was back in school! (….almost)