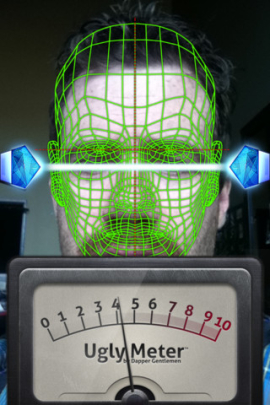 There’s an iPhone app which rates your ugliness on a scale from 1 to 10 (10 being the ugliest). Sounds ludicrous, right? Apparently not. The Ugly Meter app became surprisingly popular, pulling in $80,000 in just a couple of days. The original Ugly Meter app is 99 cents, but if you want the Ugly Meter Pro, you’re going to have to shell out $5.

The application lets you take a photo of yourself, and then it scans your face, noting the contours, symmetry, etc. of your face, before giving you your score. Each score comes with commentary. Parents are understandably concerned with the repercussions of the app – they think of it as a new form of cyber-bullying.

Cyber-bullying already comes in many different forms. The last thing bullies need is another weapon to use in their arsenal of cruelty.

Of course if you don’t think the worst of things, the app could be a lot of fun. If you ranked low on the scale, don’t feel too bad – it’s been reported that Brad Pitt earned an 8 on the Ugly Meter.

What do you think of the app? Good clean and innocent fun or a tool to be used for cyber-bullying?