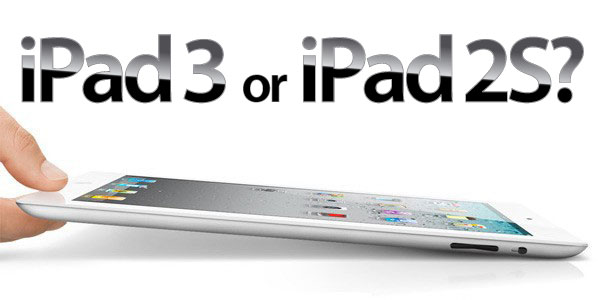 Since word hit the street that a new iPad will be announced at Apple’s event in San Francisco this March, the rumor mill has been going wild. Will we be dazzled with an iPad 3 or let down with just an iPad 2S? Whatever it is, will you upgrade?

I bought an iPhone 4S because I wanted a white iPhone. I was stiffed when the 4 came out and it was only available in black. It was crazy talk to switch to the white one when it finally appeared 8 months later, so I waited for the glorious iPhone 5 to grab my prize! Then the 4S was unveiled… boo.

Sure it’s faster, and the camera does rock. Siri was intriguing but not a selling feature for me. She’s a half-wit anyways since she (still) can’t do anything in Canada—you know, since Canadian is such a foreign language. After careful consideration I wanted a white iPhone, so I upgraded (don’t judge me).

Now rumors are flying about the next iPad. It could be a 3—thinner, retina display and HD Facetime. But it could also be a 2S—just faster, better camera and Siri. We’ll have to settle for rumors a bit longer, but I wouldn’t be surprised if it’s just a 2S.

Sales of the iPad 2 are still great and the competition is no threat. Why would Apple need to bend over backwards to include a whack load of new features and a new design?

If anything Apple’s strategy will be just like the iPhone 4S—onboard more new users instead of focusing on upgrade business from those who already have one. It’s a little different with the iPads. People aren’t tied to multi-year contracts to get subsidized pricing like they are when upgrading iPhones. Here it’s all full price for everyone.

A new model is still a new model. It’s better than the last and has some new features. If no 3 is announced, would a 2S boost be enough for you to upgrade? Just so you can say you have the latest and greatest from Apple? Or would you stick with the one you have until next year when a 3 comes out?