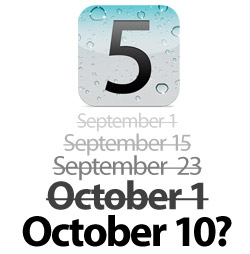 Enough is enough already. We all know iOS5 will be launching soon along with the introduction of the much anticipated iCloud service that will make all of our lives one step closer to utopia. We heard all about it this summer and they said we’d see it in the fall. It’s the fall. Where’s is it?

Rumors have been flying for weeks now about when this revolutionary new OS would be made public. You can’t go to any tech website without a handful of conflicting reports posted all over the place guessing when the big day is. There are dozens of possible dates rumored for a public release. Maybe October 10? How about September 15? Perhaps October 15? One site says September 23, another says the 27th. Pretty much your guess is as good as mine.

If we’ve learned anything from the number one company in the world, they like control (unless it involves employees, prototypes and bars). Apple likes to have a press conference, wow everyone, and then slot a release date shortly afterwards. Then we wait for that.

If we haven’t even got word of the conference that means iOS5 release day is still a ways away. Bored now.

The excessive rumors won’t stop me from downloading come release day. But I am a lot more irritated by the hoops Apple makes us jump through. Why do they do it? Because they can—it’s Apple. We drank the kool-aid.