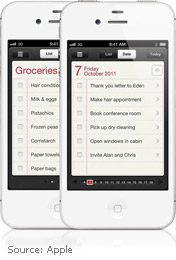 Despite all of the ho-humming over news of the iPhone 4S, it seems the let down wasn’t enough to slump sales. Apple announced today that pre-orders have topped the 1 million mark. That beats the record set by the last model. For what many labelled as an underwhelming phone just days ago, that’s some pretty impressive sales.

Why were pre-orders so high? Could be for any number of reasons. Many people held off upgrading in hopes of snagging the now elusive iPhone 5. Knowing it doesn’t exist and won’t be popping up anytime soon, the 4S will have to do.

People are intrigued about Siri. I know I am. Our phones are our best friends so how can you pass up the chance to be able to actually talk with it?

Maybe it’s the camera upgrades. They are pretty impressive. The iPhone camera has come a long way since the one that appeared in the 3G model. Not too impressed with that one I was.

It really is the most amazing iPhone yet. It should be as it’s the newest. It was a little crazy to think Apple would refresh the design after such a short period of time. The iPhone 4’s design isn’t that old and up until a few months ago only came in black.

That right there is reason enough for the high pre-order sales. Everyone wants white.

Many didn’t jump on the white iPhone 4 when it finally appeared this spring because they thought they’d wait for the next model to upgrade. Now’s the chance to finally claim that white prize.

As a devout Apple fanboy and official kool-aid drinker, that’s why I’ll upgrade. Will you?