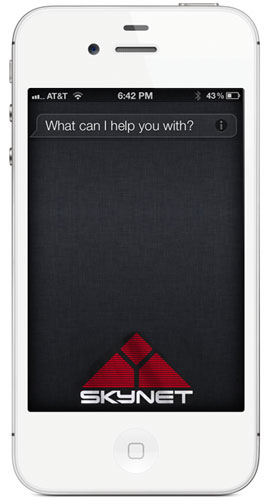 When Apple introduced Siri with the iPhone 4S, critics laughed out loud. They predicted that nobody would use Siri unless talking to your phone became ‘socially acceptable’. The Internet is now full of videos and jokes about Siri keeping us entertained.

But think about it for a moment. Siri has access to a lot of data from your iPhone. Firstly, your speech – which is a combination of talking style, accent, grammar, perceived punctuation, tone, and breathing rhythm. Secondly, the data from your GPS, calendar, emails, text messages, contacts and browser. Finally, the ability to use all this data to make a decision and execute a task for you. Going forward, adding data from both cameras, accelerometer, proximity sensor combined with the GPS co-ordinates would be extremely useful for Siri to take decisions.

Today, we live our lives through our smartphones. Siri has all the data to take control of our lives like the Daemon and force us to do something (in the techno thriller Daemon by Daniel Suarez). In today’s smartphone world, this would not be impossible. Siri could also be used to analyze data and predict crimes before they are committed (like in the techno TV series Person of Interest). For example, Siri would automatically know if I am in debt (bank account accessed), if I just lost my job (my emails, calls, text messages) and my new application for a gun permit, thereby predicting the possibility of me shooting someone. It’s that simple.

Terminator 1,2,3, and Salvation may seem a bit farfetched for now, but we are certainly moving in that direction. Imagine if Siri became self-aware like the SkyNet. We are already connected! Siri has the access to all user data across the world. Imagine the total power, control, and decision-making Siri could force upon us.

The next time you make fun of Siri, just remember one thing – SkyNet is just round the corner.