Computers have become an integral part of both our personal and professional lives. From workplaces to our homes, the involvement of a PC is unimaginable, be it entertainment, education, or profession. However, a system is prone to several malfunctions and failures. A typical PC user encounters multiple instances of errors which hinder the optimum functioning capabilities of a system. A common example is a virus threat which slows down a system and/or causes software programs to work in an unexpected manner.

The most common way to address any kind of system hindrance is to run the factory reset function, or format the partition and reinstall the operating system. However, both options are time-consuming and complex. Besides, you have to be extremely cautious about storing your files, prior to running a reset method. It is advised that you create a separate partition on your system drive for the operating system. This particular partition will be formatted entirely when reinstalling the OS. As a result, all the files that are stored in it will be lost permanently.

System restore is a viable option to get rid of errors that do not get resolved through simple troubleshooting. Formatting your PC should always be the last resort. System restore takes your computer’s settings back to the regular phase. The process typically involves just a few clicks. This not only saves time but also prompts you to save the necessary data and critical information. 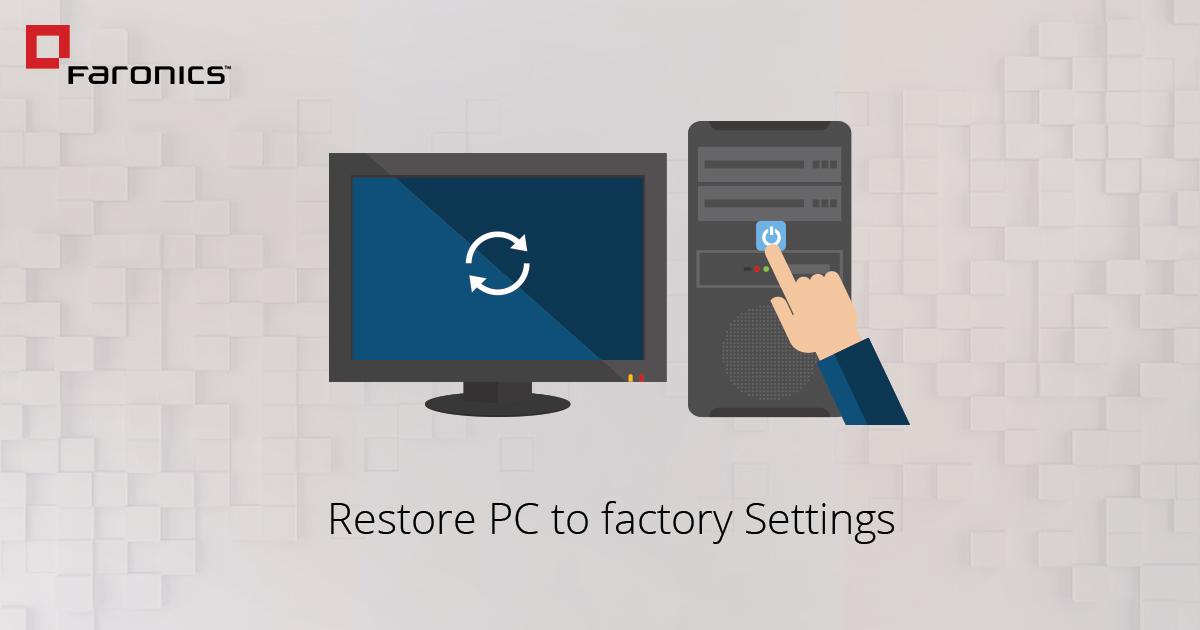 WHAT IS SYSTEM RESTORE FEATURE IN WINDOWS?

As the term clearly indicates, system restore is a mechanism to roll back your PC to a previous configuration when it was not affected by any external malware or internal malfunctioning. Nearly all major Operating Systems (OS) offer the system restore functionality, but have a different name. Windows offers it with the functionality called, ‘Windows System Restore,’ while Apple users get to experience a similar functionality, referred as Mac Time Machine. However, owing to the frequency with which PC-related issues occur and the disruptive effects they have, third-party companies such as Faronics provide technologies that make system restore much more simplified for users.

Faronics’ Deep Freeze works at the kernel-level and has a ‘Reboot to Restore’ functionality. When Deep Freeze is deployed into a system, it captures and secures the pristine system configuration. The new data that enters into the device is redirected to a separate partition. Every time the device is restarted, the redirected data is ignored and the original configuration is referenced. Hence, the system is restored to its original state each time you reboot the operating system. Therefore, irrespective of any system error, all you need to do is restart the device to get rid of all the issues.

When the Windows restore mechanism is enabled, the PC starts capturing snapshots of the configuration at critical moments. Thus, in case of a failure, you can revert the system to a previously saved snapshot. However, if any process in the cycle remains incomplete, your PC may not function as desired, even after the restore. But system restore performed with Deep Freeze ensures total recovery of the PC even in multi-user environments.

The Mac restore function also works in a similar fashion – capturing snapshots of critical files, configuration settings, and applications. These snapshots are stored separately on the same drive or in an external one. Evidently, this technique requires considerable storage, and it even stops creating restore points if sufficient space is not available. As a result, restoring to the latest healthy configuration may not be possible at all. Deep Freeze system restore (being a kernel-level functionality) saves the ideal configuration within the system, ensuring effective and complete rollback with every reboot. This alternative system restore technology also eliminates the need for extra storage space for successful rollback.

HOW TO UPDATE RESTORE POINTS WITH DEEP FREEZE?

Suppose, you have installed a new software or made certain changes to the settings and you intend to preserve the system post these changes. In that case, you can temporarily disable Deep Freeze and re-enable it once the changes have been saved. Upon reactivation, Deep Freeze creates a rollback point with the modifications intact.
After freezing the system, whenever you reboot your device, it reverts to the latest frozen state.

The ease of use offered by Deep Freeze system restore makes it more advantageous to users than the default restore functionality offered by any default OS.