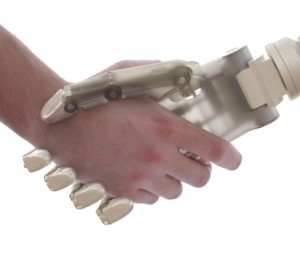 Meet 1557. The new employee is a robot. This robot just replaced me in the warehouse today. This is the reality.

Amazon acquired Kiva Systems for 775 million. Kiva Systems makes robots for moving items in large warehouses. The task that was performed by humans will now be taken over by robots. All the fulfillment centers will implement the robotic systems designed by Kiva Systems as Amazon strives to be more efficient in this tough economy. Here is a really cool video about how these robots work independently in a warehouse.

Foxconn International Group – the company that manufactures smartphones for Apple and other companies – also plans to implement robotic systems to replace humans. This would resolve employee complaints of repetitive stress injury and employee suicides due to high stress.

Amazon has set a dangerous precedent that gives rise to critical questions:

It would be disastrous if the software in robotic systems gets corrupted or is taken over by malware. Moreover, if Artificial Intelligence takes over the robots, we are doomed! How do you fight an army of robots running berserk in the city? I just hope there is a Deep Freeze for Robots soon – we could just reboot the robots!