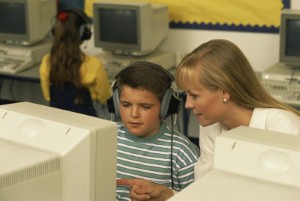 School district wants one computer for every student.

Kids these days have no idea how good they have it in terms of available technology. Now, a school district in Illinois wants to make it even better by providing one computer for every student.

An elementary school district in Carol Stream hopes to have one classroom computer for each one of about 4,000 students by 2014, according to local news source the Daily Herald.

“You can put a textbook in front of a student and it may mean nothing, just like putting a computer in front of a student. It’s how do you utilize that resource to make the child a better learner,” Superintendent Bill Shields told the newspaper. “It’s the idea of personalizing education for kids. Teaching isn’t something that takes place within four walls anymore.”

Proponents of a 1-to-1 computer to student ratio say such a program gives kids the skills to do well in college and beyond. A Boston College study found that students in a 1-to-1 classroom computer setting did better on tests than those without such internet access.

“This is not about the technology,” Mark Edwards, superintendent of Mooresville Graded School District, told The New York Times. “It’s not about the box. It’s about changing the culture of instruction – preparing students for their future, not our past.”

Mooresville also has a 1-to-1 computer to student ratio.

Of course, getting that many devices into students’ hands is not cheap. District 93 in Carol Stream will start out with 290 iPads and 570 MacBook laptops, costing $879,000.

Carol Stream school officials hope the costs will pay off with better student learning and test performance, according to the Daily Herald. In the Mooresville school district, graduation rates went from 80 percent to 91 percent in the three years since every student received a personal classroom computer, according to The New York Times.

Do you think a classroom computer should be provided to every school student? How early should schools expose kids to computers?