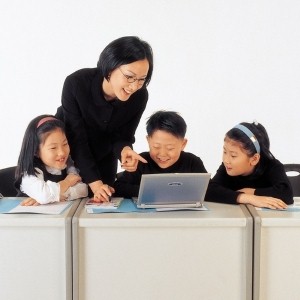 News Corp. is now getting into the education business.

News Corp., Rupert Murdoch’s company that runs everything from Fox News to the Wall Street Journal, is now getting into the education business. The company, in conjunction with AT&T, is launching a new educational pilot program and is giving away tablets to select schools.

Amplify, a new spin-off company focusing on education, is teaming up with AT&T to offer free tablets to as yet undetermined school districts. The new company will focus on educational software and tools designed for tablet use, Bloomberg reported. The company is aiming for market share in the $600 billion education market in the United States, according to The Associated Press.

“We’re bringing enormous educational software to bear on this,” Joel Klein, Amplify’s head, said to Bloomberg. “We’re very excited for the start of this.” Klein is the former chancellor of New York City Schools.

The classroom software was developed in conjunction with Wireless Generation, an education assessment software company that News Corp. bought in 2010 a majority stake in for about $360 million.

To test out its educational programs, Amplify is giving its programs away along with donated tablets that have cellular connectivity. The purpose of doing this, Klein said, was to get an accurate assessment as to whether their programs worked well with students.

“There’s no way to do high quality research and development without working in schools,” Larry Berger, Wireless Generation’s founder, said to the AP.

The goal of Amplify, according to Klein, is that districts will see the benefit of such technology and further include it as part of their curriculums. The test for the software, according to the AP, is to see if it measures up compared to already existing classroom and technology initiatives.

“If we have the impact that I hope we’ll have, people will find room in their budgets to support the work,” Klein said to the wire service.

Do you think this new classroom software will prove beneficial, or will it be a bust? What does Amplify need to offer that cannot be done on the average classroom computer?