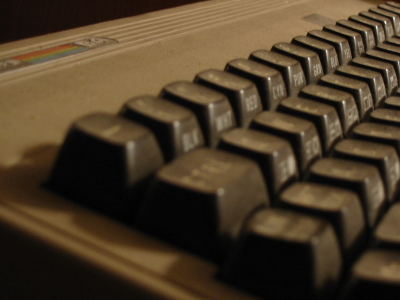 It’s been thirty years this week since the release of my very first computer, the Commodore 64.

For those of you unfamiliar with it (or too young to remember), the Commodore 64 was an 8-bit home computer introduced by Commodore International in 1982. For a while (1983–1986), the C64 actually dominated the market with an estimated 30% and 40% share and two million units sold per year. At the time it outsold the IBM PC clones, Apple Inc. computers, and Atari 8-bit family computers.

If I recall correctly, my family and I drove all the way from Vancouver to Seattle sometime in 1982 to purchase it at a discounted price of $399 (I think it was $895 in Canada). My mom didn’t speak to my dad the whole ride home.

My father always was, and still is, an early adopter. He recognized immediately the value of the Commodore. Using some word processer program and an Excel-like program called Calc Result, he was able to use the Commodore for work.

Meanwhile I was enjoying the challenge of beating my brothers at games like Jumpman, David’s Midnight Magic, and Aztec Challenge. I think this was around the time that my mom came around to appreciating the Commodore. It was something my brothers and I could all play together, without fighting. Of course back then we didn’t have to worry much about computer viruses.

Sure viruses existed back in the 80’s, but they were mainly written for PC and Mac. The first Commodore 64 virus, the C64/BHP-A appeared in 1986 and was the first full-stealth file-infecting virus and the first cluster virus. But like I said, it wasn’t something I remember worrying about. To me that piece of gigantic hardware was indestructible. Like the commercial at the time said, I simply did “Adore my 64”.

For those of you who want to recapture some of that Commodore nostalgia, you can purchase one of the recently released recreations.  The C64x EX Extreme is the second in its series of modern computers to be crammed into the shell of the old Commodore gaming console. But at a price of $1499, I can’t imagine even my dad will consider buying one.