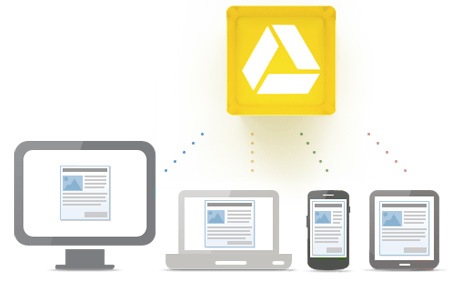 Google Drive has arrived and people all over are taking the new cloud storage service out for a spin. The free drive space is great, and the cost to buy more gives the competition a run for its money. While an issue over converting your files into Google Docs format to work on them is a slight bump in the road, there is one major roadblock— the terms of service.

The terms of use start off fine with “You retain ownership of any intellectual property rights that you hold in that content. In short, what belongs to you stays yours,” but then goes on to say “When you upload or otherwise submit content to our Services, you give Google (and those we work with) a worldwide licence to use, host, store, reproduce, modify, create derivative works (such as those resulting from translations, adaptations or other changes we make so that your content works better with our Services), communicate, publish, publicly perform, publicly display and distribute such content.”

That’s right, putting your files in the cloud also puts them in Google’s hands, giving the search giant permission to do with them as it wishes.

This doesn’t flat out mean that the new business plan you’ve been chipping away at for years will all of a sudden start showing up on start-up blogs all over the world. Or those not so flattering pictures from your friend’s birthday party last weekend will suddenly appear on billboards in a “party responsibly” campaign. But your files could be used internally, however Google wants. Maybe you’d start showing up in Google Ads. You’d never know!

The wording in the terms of service is open-ended and ambiguous. It’s that same sort of ambiguity that was found in proposed U.S. anti-privacy bills—which prompted Wikipedia to go dark for 24 hours in protest.

It’s been no secret that Google has been mining the info in your Gmail for years.  They use that content to profile you and custom tailor your web experience using targeted ads. The recent privacy policy change on March 1 opened the door to compile the data from all of your Google accounts under one identity—yours. While I’m not sure why anyone would really trust Google after that, it should come as no surprise that with this latest service, Google would be mining that data too.

I get that the more Google knows about me the better it can serve me. I might not agree with the whole “search, plus your world” thing, but the fact Google gets to use any of the data I upload to Drive is not the surprise I was looking to find inside.

Google’s offering with Drive is aggressive compared to its rivals, I admit that. But while Dropbox might be double the price for half the storage, you at least get to keep ownership of your files—it’s written right in their terms of service.  Microsoft is offering 25GB of space to existing Skydrive customers to retaliate, and in a comparison of privacy policies you can see Microsoft won’t use your content for marketing.

If you don’t like the ambiguity of Google Drive’s terms of service, you can opt out of using it—but Google still has permission to use all of the files you stored there long after you’ve deleted them and crawled back to the competition. That’s right—leave all you want. Google can still use them.

Will this stop you from signing up? Or have you accepted the fact that Google already has enough of your personal info that there’s no point in trying to hide?

*Updated to include Microsoft Skydrive offer/comparison