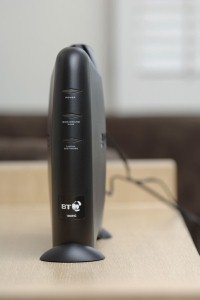 Your wireless router might be able to save lives.

For the average user, having no cellphone service is annoying. But for first responders, a slowdown in communication can mean the difference between life and death. In times of crisis, mobile phone networks can become overburdened, which has caused communication and coordination problems for emergency workers. In order to address those issues, a group of German telecommunications researchers led by Kamill Panitzek has proposed the idea of an “emergency switch” that would disable security protocols on home routers.According to a press release describing the concept, new smartphones are able to create their own local wireless networks, but their range is severely limited without internet access. Panitzek’s plan would allow emergency workers and privileged users to utilize consumer wireless routers to get online – much in the same way a guest account connects to the network.

“An emergency communications system that could automatically piggyback on domestic wireless routers connected in urban locations could help first responders stay in touch even if cellphone towers and networks are down,” according to a press release describing the paper.

The idea could save lives, but it would have to be done carefully. According to a recent Ars Technica article, Panitzek’s proposal has already received a significant amount of criticism from privacy advocates. Security expert Bruce Schneier said such a system could allow cyber criminals and other malicious users to gain access to private networks.

“The problems are the same,” Schneier told the news source. “Once you build such a system, you have to build the security to ensure that only the good guys use it. And that’s not an easy task. It is far more secure not to have the capabilities in the first place.”

Would you be comfortable allowing emergency workers to access your wireless network? What controls or guarantees would you want in place before a system like that is implemented?