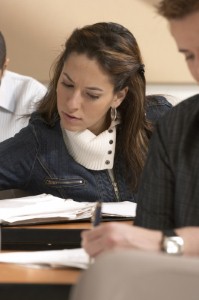 The expansion of Facebook and Twitter has been a fun ride for many, but the growing number of younger kids on these websites means social media use has become an issue for classroom management. One Chicago school found this out the hard way, according to the Chicago Sun-Times, which reports that a Facebook and Twitter beef turned into a physical brawl between some high school girls.

“It was my first day back and I’m fixing to go to my classroom, and one of the girls walked up to my best friend and hit her,” Jenise Williams, a sophomore at the Chicago Academy of Advanced Technology, told the newspaper. “I turned around and one of the other girls hit me with a lock, and while we are fighting, someone hit me with a lock on the other side of my head. So after we had got done fighting, and I went to the hospital to get checked out, I went on Twitter to find out what was going on. CAT was trending.”

Williams said she saw multiple tweets from people about the fight, including some from her attackers. She said the whole situation stemmed from a comment she posted about a male classmate on her Facebook page. Matt Hancock, the school’s executive director, said cases like this are rarely clear-cut, but the school needs to step in to help deal with the cyberbullying, especially when it reaches a physical level between students at school.

Holli Levinson, an education project director with the Anti-Defamation League, said bullying usually starts slowing down after middle school, but cyber bullying can pick up in high school and after. She said much like in Williams’ situation, the fight can start on Facebook and be finished in schools the next day, something that no teacher wants to see.

Classroom management isn’t easy, but what say you, readers? Can teachers control what students do on social media? What punishments should be in store for those who do bully via social media?