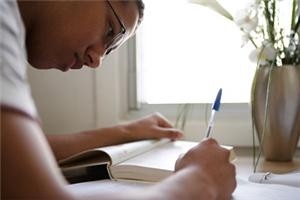 Textbooks are so last century.

The end of the traditional textbook may be near, as schools increasingly look to mobile technology.

Schools from Alabama to the Isle of Wight in the U.K. have begun ditching textbooks in favor of downloads on portable electronics like iPads.

For example, last year, Lake Minneola High School in Florida distributed about 2,000 iPads to students, according to the Orlando Sentinel.

Such technology offers cash-strapped school districts an opportunity to save money. Casey Wardynski, the school superintendent in Huntsville, Alabama, told The Huntsville Times the district expects to save $1.8 million by switching to tablets over textbooks.

“It will be the first major transition of a district in the U.S. from paper to digital,” Wardynski said. “We will fade out textbooks and fade in digital books.”

Now, schools have to buy new textbooks for a variety of subjects each year. With tablets, the schools invest in the technology once and then provide updates when needed. This way, schools make a big upfront investment, as opposed to one yearly, according to The Huntsville Times. Proponents also say electronic texts better engages students. It also frees up student backpack space.

“It will make more information available to the kids and let us broaden the curriculum,” Huntsville school board member David Blair said to The Huntsville Times. “It will also keep the kids from carrying 60 to 70 pound backpacks with all their books.”

Still, schools face obstacles in implementing such changes. For one, there is a need to implement classroom control over all of those additional devices to reduce theft and issues with students using the tablets for non-educational purposes, according to the Orlando Sentinel.

Cost concerns related to initially purchasing the technology mean that school districts could have issues in giving new technology to students to replace the old textbooks at the beginning. For example, some schools required private donations to purchase new technology, according to the Orlando Sentinel.

Textbook publishers already feel the financial heat from new portable technology. Publishers like McGraw-Hill and Houghton-Mifflin saw decreased revenue last year, according to the Wall Street Journal. This helps explain why Houghton decided in May to load some of its content onto Nook tablets.

Do you think all schools should replace textbooks with tablets? How does such a change affect classroom control of technology?