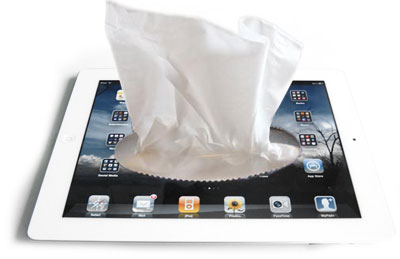 I can’t even remember a time someone asked me for a tissue, and not a “Kleenex”. Some products become synonymous with a brand name.  The iPad is another Kleenex. You want a tablet? You buy an iPad.

When the original iPad was released, I admit I didn’t jump on it. I was the guy on the sidelines shouting “it’s just a large iTouch, who would need that?” My iPhone gave me internet on the go, and when I was at homework there was my PC (yes I use a PC). If need be, a laptop would suffice when travelling.

There wasn’t a need for anything else. But Apple made something that squished in right between mobile devices and laptops and the result blew the doors wide open—well, after some time of course.

When I got an iPad (as a gift, I swear) I was actually impressed! It still sat on my shelf for a long time. Slowly though I started to use it—for things like reading RSS feeds on the couch before bed. The experience was way better than squinting to see the screen on my iPhone, and a far less awkward than trying to balance a laptop on top of me. I got hooked.

All of a sudden I found myself carrying the iPad with me everywhere. When iPad 2 came out earlier this year, I even upgraded.

How is it that a product that I had absolutely no need for became something I could not leave the house with? Apple made the market. That’s why the competition has no way of beating it, the iPad made its own unique place in the world. There was no hole to fill, no crazy market cry out for a product that was needed. Apple built it, and the people came.

Last quarter Apple sold 9.25 million iPads, up 183% since last year at this time. In a recent study of 1,100 people who were interested in buying a tablet, more than 94.5% of them all voted the iPad as their top choice. Their second choice? Hewlet-Packards’s TouchPad with a mere 10.3% of interest.  With a response like that it’s no wonder Best Buy has over 200,000 unsold TouchPads in its inventory! HP even threw in the towel this week citing the “tablet effect is real” and sales aren’t meeting expectation. They may as well have said “Apple is kicking our butts”.

Can the iPad be killed? I say no. It is what it is. You can try and be the next Kleenex but you’re just going to end up being tissue. Maybe try reinventing the napkin?