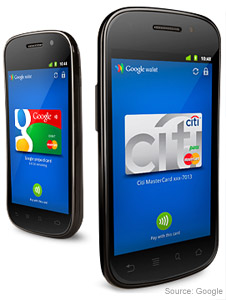 After announcing the service in May, Google finally launched Google Wallet into the wild yesterday. For those of you with a question mark still above your head, this is an app for Android that turns your phone into a mobile payment system. How cool is that?!

Payments become as easy as tapping your phone on a sensor. It’s all done with Near-Field Communication (NFC).

I’m a fan of any technology that makes my life easier. Bonus points to anything that allows me to carry around less stuff. Getting my first iPhone was a great day. Not just for the 4,000 obvious benefits of having an iPhone, but because it combined several devices in one.

Gone were the days of carrying around a cell phone, MP3 player and a camera everywhere. The phone allowed me to carry just one. Yes the camera on the first iPhone was nothing great, but at least there was a camera.

Right now Google Wallet is only available on the Nexus S 4G on Sprint’s network. Given time, it will be everywhere. There have been rumors that the pending release of Apple’s iPhone 5 (still waiting!) will include NFC as well. I can’t see Apple letting Google get a head start with mobile payments. Of course it did take years for the iPhone to be able to ‘copy and paste’…

The technology may be ready but it will take some time for vendors, credit card companies, banks and cell providers to all fully adopt it. What good is a phone that can pay for something if few stores are capable of using it?

I’ll still have to carry around my phone and my wallet for a bit longer. It’s only a matter of time though before I have one device to rule them all. I just need some way to get my phone to hold my keys…