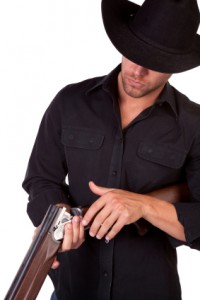 So there’s been another shoot out at the OK Digital Carrel. And the bad guys walked away victorious… yet again. What is this OK Digital Carrel you ask? Well, you’re hanging out there every day – the Internet. Massachusetts is a prime example of the lawless Internet. The Boston Herald reported statewide data breaches hit an imposing 5 million. Now here’s the kicker – with only 6.54 million residents, that’s 76% of the entire population!

Massachusetts is one of the only states with such strict reporting laws. Companies must report even just one lost credit card. The reporting bureau gets more than two reports each day. Why are the bad guys allowed to run freely across Massachusetts’ Internet without any consequences?  Where are the sheriffs and good guys when we need them?

It’s refreshing to know that real crime rates are declining. But cyber crime, on the other hand, is on the rise. In the wake of major corporation attacks like Sony, RSA, Citigroup, and Epsilon, there are oceans of personal information floating around. And once your information has been leaked, how can you prevent it from falling into the wrong hands? This week, next month, or even next year?

So it’s a reenactment of the cowboys verses the gunslingers… except in this case, the cowboys are losing. They’re vastly outnumbered. There’s little to no justice. The gunslingers are getting more sophisticated. They’re outsmarting the cowboys. They’re downright brilliant actually. Now they’ve even figured out how to steal trusted Certificates of Authority — the SSL locks that tell us a website is actually safe.

What’s next? Well I don’t know about you, but I’m worried. I’m starting to sleep with one eye open wondering who’s going to step up and be the hero? Where have all the cowboys gone? Who will protect our identities and save the innocent?