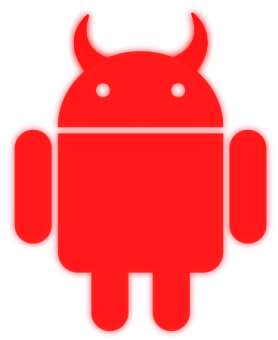 It’s been no secret that Android has been a lucrative playground for all sorts of malware. Q1 this year saw 5,000 malicious apps target Google’s mobile OS, jumping to 20,000 for Q2. Estimates for the Year End total? 130,000. The Mayans said 2012 would be the end of the world—could this be the cause?

Mobile malware can do a lot more than just steal your info. It can track you, text/call premium numbers, and the latest find—install a botnet on your phone to send out email spam. Clever… Trend Micro reported yesterday that earlier predictions on Android malware levels were wrong. They were low—very low. The numbers are going to explode. Here’s why:

Android sales are hot. More than half of all mobile devices run Android. Because it’s an OS, it can be found on a wide range of smartphones. Many of these phones are offered for free when you sign up for a contract with a cell provider (as opposed to iPhones, which will have a price tag). Android phone sales have skyrocketed because of this, and they’re many people’s “first smartphone.” Suddenly your phone isn’t just for calls and texts. Now you can surf the web, check email, and of course download all sorts of great apps! With all of these “new” features, it’s easy to forget the common sense security practices we do with our desktop computers.

2. Downloading apps from an untrusted source

Where you download these apps is important. The same way you shouldn’t take candy from a stranger, downloading apps from random websites is even worse. If you download from anywhere other than Google Play, you’re at higher risk. Maybe you’re trying to avoid the price tag on that app and find it offered for free on a random website. It may be free but it will have a catch. Get ready for malware! Worth the free price tag?

3. Downloading apps from a trusted source

Of course, it’s child’s play to get an app into Google Play. It’s all open. You pretty much just pay and poof it’s there. The chance of downloading a bad app from Google Play is low, but there have been many malicious apps distributed through there. Once a bad app gets caught, Google does remove it. Not just from Play, but from your phone too. Apple may be hardcore, making apps jump through all kinds of hoops before being allowed to grace the presence of the App Store. Not to say a few strays haven’t made it through, but Apple’s control the App Store leads to trust—backed up by its track record.

Trend Micro’s prediction doesn’t seem so unlikely given that Android sales are showing no sign of slowing down. Knowing how much cyber criminals love Android, will that sway your decision to jump into the smartphone market? Or if you have one are you thinking about going with the competition?