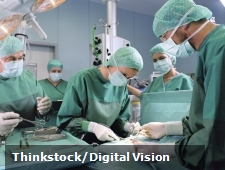 The robot allows for more precise and less invasive surgeries.

Surgeries – even when they involve routine procedures – are rife with risks. Besides the possibility of complications involving anesthesia, anytime a surgeon cuts into a patient with a scalpel, there is the risk of infection or an errant motion causing greater damage to an organ, nerve or artery. Surgical success has always depended on the precise movements of the operator’s hands, but there is a limit to how accurate human hands can be. Hospitals looking to diminish the invasiveness of surgical procedures have been turning to an emerging, high-tech solution: robots.

The benefits of a robotic surgeon
Instead of going the most direct route to a surgical target, sometimes needing to unsettle a major organ or crack open the rib cage in the process, robotic instrumentation allows for fewer incisions, drastically decreasing on the trauma incurred during the surgery and shortening recovery times. While this sounds like great news to patients, hospital administrations are as much enticed by the cost benefit of such a method as they are by the potential to decrease patient discomfort. Robotic surgical machines can cost as much as $2.3 million, including the robot itself, operating console and server bay. That’s a lot of money to drop on a machine that essentially does the same job as a human surgeon, but the savings come later through reductions in patient recovery time.

How the robot operates
Although the thought of allowing a machine have free reign over the inside of a patient’s body may make some uneasy, it should be noted that a surgeon is operating the robot the entire time. Situated in front of a nearby console, the surgeon uses the intuitive controller design to guide the robot’s appendages. The various organs, muscle and tissue appear before the surgeon on the console display, courtesy of the robot’s endoscopic video camera. Although surgeons lose the tactile feedback of standing in front of the patient and performing the surgery with their own hands, the computer monitoring software provides an incredible visualization of the body as well as a sense of depth.

The need for skillful human operators
The robot, like every useful piece of technology, is only as good as its operator. As intuitive as the interface is and as accurate as the robotic movements can be, success is ultimately dictated by the actions of the surgeon controlling the machine. The American Cancer Society examined the various methods of performing a prostatectomy, and although it found that compared to traditional methods, robotic-assisted procedures resulted in less pain, recovery time and blood loss for the patient, it cautioned that these results were dependent on the skill of the surgeon.

Increasing adoption rates of robotic surgeons
Robotic surgical instruments are becoming more popular with hospitals aiming to cut down on costs and entice patients who are looking for latest and safest medical technology. CNN Senior Editor Ryan Bradley recently examined the robotics trend, finding that 80 percent of prostatectomies are now conducted with the assistance of a robot. Hospital administrators appear to be impressed with the results of the new tech. According to a report issued by the Journal for Healthcare Quality, 89 percent of hospital websites offering robotic surgery make claims of the method being clinically superior as well as resulting in less pain. If the benefits of robotics continue to outweigh the initial cost, surgeries performed by human hands alone may become a thing of the past.

Are robotic surgical instrumentations a better and safer alternative than a hands-on surgeon? Would you feel comfortable going under a machine’s knife? Tell us what you think in the comment section below!