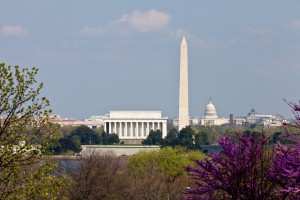 Technological vision has helped one DC university distinguish itself from another.

Stationed just a few miles away from one another inside the nation’s capital, Georgetown University and George Washington University (GW) are among the strongest academic institutions in the United States. But while each has a storied history and impressive record of success to draw upon, technological innovation has recently become a point of distinction between the two. Whereas a coalition of GW professors have insisted that their school may still be years behind the digital curve, their crosstown counterparts are eagerly awaiting the result of a new multi-million dollar modernization effort.

Behind the times
The GW Faculty Senate recently conducted a comprehensive review of the university’s classroom technology infrastructure, finding a prevalence of outdated equipment. According to its independent student newspaper, The GW Hatchet, the college has now added 146 “technology-equipped” classrooms to its roster since 1998. However, future progress could be stunted as budget shortfalls restrict improvement and digital learning models continue to evolve in new directions in schools around the country.

Aside from their reliance on audiovisual and IT equipment that may be past its prime, a lack of funding has also restricted the academic technology department’s maintenance capabilities.

“I do feel a bit embarrassed when I think about the fact that students pay huge sums of money, and here we are, jerry-rigging [presentations] like this,” interior design professor Catherine Anderson told the newspaper, remarking on the primarily analog audiovisual equipment in her classroom.

To their credit, GW administrators have promised campus-wide digitization within three to four years. According to the Hatchet, technology teams are also orchestrating a pilot program for adding cameras and microphones that record lectures for students to instantly sync and store on digital devices. However, some still have their concerns that such improvements may only be just enough to remain competitive – as opposed to development being a point of leadership.

Ahead of the pack
Approximately 15 blocks to the west of GW, technology advocates from Georgetown University are currently expressing global ambitions. With an $8 million dedicated investment, the school hopes to turn the District of Columbia campus into a relay station of international educational activity.

“These grants are a good investment in our faculty, allowing them the freedom to develop pilot projects or to experiment with new approaches to teaching,” Georgetown provost Robert Groves explained. “By creating opportunities to support innovation among our faculty, we are strengthening our investment in the intellectual resources of our own community.”

Several professors have already demonstrated the vast potential of turning a classroom computer into a versatile telepresence utility. One seminar course has partnered with students in Doha, Qatar to conduct a variety of videoconferencing sessions that have served as entrepreneurial forums. Similarly, Georgetown’s nursing program has benefited from a number of distance-learning initiatives that will prepare students for a new era of digital collaboration in the healthcare sector.

Although administrators acknowledge the importance of harnessing the ingenuity of campus professors, the school has set up a few ground rules to guide grant allocation. According to the Georgetown Voice, officials are looking to equitably distribute funding to projects of variable scope, duration and intended purpose. While there is room for transformative long-term visions, directors are hoping to see sequential and pragmatic improvements as well.

Most importantly, according to the Voice, administrators will be actively soliciting feedback from students before, during and after project installation. While just about every classroom could benefit from a digital enhancement, investment should be focused on areas that will have a clear, positive impact on the learning experience. As one student told the news source, he worried that overambitious applications could actually overcomplicate the learning process in some scenarios and block lines of communication between presenter and audience.

Which academic areas do you think have to most to gain from a technological refresh? What’s the most promising project you’ve read up on recently? Share your thoughts in the comment section below!