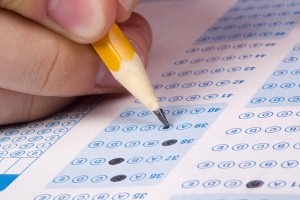 Standardized testing is now finally being digitized, as schools across North America shift their tests from Scantrons to the classroom computer.

Thanks to the proliferation of computers and other internet-enabled devices, it is becoming increasingly less important for today’s students to know how to write essays and solve equations with paper and a pencil. One of the last stalwarts of this era of education – standardized testing – is now finally being digitized, as schools across North America shift their tests from Scantrons to the classroom computer.

The Las Vegas Sun reported earlier this month that 19 million students in 25 U.S. states will take the Common Core exam – a test designed to enact more stringent nationwide education standards and benchmarks – via a PC or tablet.

According to a report from Boston College, this type of shift is inevitable as students become increasingly familiar with new technologies and as recent advances cause a paradigm shift in education. As a result, today’s pupils often receive better scores because they are more familiar with computers than with pencils. The difference is akin to asking a mathematician accustomed to always having a calculator handy to solve problems with a slide rule.

Benefits of computer-based testing
One of the main perks of these types of tests is that classroom software can more quickly and accurately provide test scores and feedback to teachers, according to The Hechinger Report. Instead of waiting weeks or months for educators to receive test scores, new formats allow for almost instant feedback that is far more detailed in its analysis of each pupil’s performance than ever before.

In addition, the Sun reported that computer-based tests allow for better comparisons of student achievement levels. For example, a test taken by all fourth graders can only show how one pupil directly compares to same-aged peers. Thanks to computer-aided testing, though, educators can see how that same fourth grader compares to second graders or sixth graders.

This can work because computer-based standardized testing can alter the questions posed based on the previous answers given, according to the news source. So if a student answers the first five questions correctly, the next ones posed will be progressively harder. In this way, a teacher can see how well a child responded when presented with questions at a difficulty beyond his or her current grade.

Do you think it is a good idea to shift from traditional standardized tests to computer-based exams? What classroom management strategies should schools employ to make sure students don’t cheat when taking a test on a classroom computer? Leave your comments below to let us know what you think about this trend!