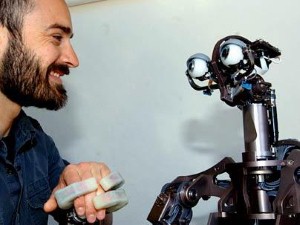 Teachers of the future may look a little different, as new technology could replace human teachers with robots.

Teachers of the future may look a little different, as new technology could replace human teachers with robots. Researchers have been working on robotics to help educate a range of people, from adult dieters to kindergartners.”Creating artificial intelligence based on learning and social skills … will set a new standard for interactive educational technologies,” Adam Sneed, a researcher for Future Tense, wrote in an August 8 opinion piece.

Robots have already been introduced into classrooms in Japan and South Korea. In Tokyo, a robot called Saya was used in fifth grade and sixth grade classrooms. Saya has a rubber face, with motors that allow it to show six basic facial expressions. However, according to The Associated Press, its limited movement and vocabulary meant that the robot could not instigate much classroom control.

“This type of technology can bring many types of teaching that would otherwise be unavailable into more classrooms,” Tucker Balch, associate professor of interactive computing at the Georgia Institute of Technology, said to CNN.

The team, working under a grant from the National Science Foundation, is hoping to “develop the fundamental computational techniques that will enable the design, implementation and evaluation of robots that encourage social, emotional and cognitive growth in children,” according to the NSF website. “Critical societal problems require sustained, personalized support that supplements the efforts of educators, parents and clinicians.”

The research team is aiming to develop a robot that can be the constant companion a child might need, since humans are not always able to provide that level of consistent interaction, according to the NSF.

“Eventually if a robot can develop its mind, then the robot can be a very close friend of a child,” Juyang Weng of Michigan State University’s Embodied Intelligence Laboratory said to Sneed. “The robot can be a teacher in a very fundamental way.”

Can a robot replace the classroom computer as the go-to technology standard for schools? Do you think robots can ever completely replace human teachers? Leave your comments below to let us know what you think!