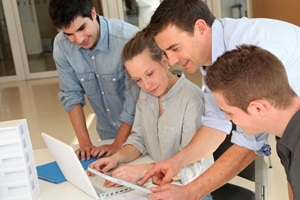 Today’s college computer labs should be geared for improved collaboration and open experimentation.

College computer labs tend to conjure up the image of bleary-eyed, over-caffeinated students furiously finishing term papers moments before they’re due. While these campus facilities often have much more to offer than simply a space for quiet seclusion, this perception tends to overwrite some of the less apparent advantages. In 2011, Bentley University’s Computer Information Systems (CIS) team completed an ambitious overhaul of its formerly nondescript headquarters and learned several valuable lessons along the way.

Recognizing the signs
The first step toward a solution is defining the problem. The trouble is, too few campus coordinators recognize dull computer labs as a pressing concern for their students or faculty. When tasked with managing Bentley’s CIS lab in early 2011, senior lecturer Mark Frydenberg saw things a bit differently.

In a recent guest column for EdTech Magazine, Frydenberg explained that the first red flag was the fact the computer lab was not even included on the campus tour for prospective students. Instead of being viewed as a potential marketing asset in an increasingly digital age of education, the facility was viewed as a commodity equivalent to what just about any university could offer. As a result, he quickly understood that his forthcoming rebrand of the facility would have to address both technological infrastructure and personal perceptions.

Designing effective solutions
Frydenberg wisely approached the project with a clear vision of success. Not only should the space be completely different from what students and staff remembered, it should boast features and capabilities that far exceed those of run-of-the-mill computer labs stationed around the region and country.

“When asked to oversee the CIS Lab at Bentley, I knew that I wanted ours to become an informal place that supported learning and discovery not only about course-related topics but also about the web and technology in general,” Frydenberg told Campus Technology at the time.

The rebranding also included the adoption of a new nickname, the Sandbox, reflective of open and collaborative experimentation environments popular in the software development community. The product has lived up to the label as well, employing a variety of classroom control technologies to encourage students’ digital creativity and ambition in ways that won’t accidentally contaminate or compromise broader network activities.

According to Campus Technology, the lab has been deliberately organized to promote group work and informal conversation between CIS tutors and curious students. The facility even has a dedicated computer bank for more advanced specializations like application development and network analysis – along with qualified staffers capable of teaching and guiding learners on a flexible schedule.

Promoting results
With a detailed vision and adequate funding, innovative facilities like Bentley’s CIS Learning and Technology Sandbox are within reach for many forward-thinking universities. However, administrators should not be deluded into believing the “if you build it, they will come” logic. In reality, it takes an intelligently crafted promotional strategy to ensure the intended audiences are making use of these significant campus IT investments.

In his EdTech post, Frydenberg offered a few salient tips for creating a successful rollout and sustaining engagement. First and foremost, he encouraged administrators to document their transitions in great detail. By presenting status reports, before and after photos or even time-lapse video of the facility improvements, lab directors can build a buzz and convince administrators that the initiative was worthwhile.

An active social media presence is the second essential component, in Frydenberg’s opinion. Between calling on creative students to submit their designs for a Sandbox logo to publishing two or three educational blog posts every week, the center has cultivated the kind of engagement that boosted in-person tutor bookings and online traffic.

What’s a bigger hurdle for today’s campus computer labs: Battling community indifference of boosting technological resources? How are the two related? Let us know what you think in the comments section below!