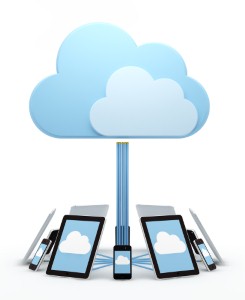 There may be one area in which businesses haven’t fully utilized the cloud’s capabilities – disaster recovery.

The way some IT professionals talk about the cloud, you would think it has the power to cure anything that ails modern computing. While cloud-based solutions may not be totally perfect yet, the cloud does not a number of unique solutions. From remote email access to video conferencing, companies all over North America have begun to more earnestly embrace the tech solution. However, there may be one area in which businesses haven’t fully utilized the technology’s capabilities – disaster recovery.

Disaster recovery as a service (DRaaS) provides businesses with a remote server for storing all important information in case of a total system shutdown. Think of it as cloud-based system restore software. With a quality DRaaS solution in place, data is fed in real time into the cloud and backed up regularly. Such a system can make sure that no work-critical is lost no matter what happens to on-site physical devices. According to Network World, two of the main benefits of DRaaS are that data can be accessed from any device with an internet connection, and information is automatically updated and stored within the cloud. In addition, it is often cheaper than legacy methods since cloud computing allows businesses to protect vital information without
having to maintain their own backup hardware.

It is called DRaaS particularly because of the benefits a remote server solution can offer in the case of a disaster. PCWorld cited the 2011 tsunami that struck Japan as a prime example of how the cloud can keep a business running regardless of the situation. The natural disaster temporarily shut down most of the country and destroyed critical infrastructure. In such a scenario, having an in-house backup server would not be of much use since the tsunami would have likely damaged the main technology infrastructure. However, a company that used DRaaS would be able to get back to business much more quickly, which is a critical feature for organizations with international operations that need their infrastructure to run at all times.

Potential pitfalls of DRaaS
While cloud-based disaster recovery has the potential to greatly assist businesses in the event of a major disruption, it still has a ways to go before it becomes the foolproof go-to system restore and recovery solution. For example, while Network World estimated the DRaaS industry to be worth between $425 million and $450 million, it is still only a fraction of the total $3.5 billion disaster recovery marketplace.

Some of the same issues that are present when implementing any cloud computing solution are also worth considering before implementing DRaaS, according to PCWorld. For example, a cloud-based backup system is only as good as internet connectivity allows it to be, and a business that loses its online access would also lose its backup solution. In addition, all cloud-related security issues would still be present. DRaaS would also need to have especially comprehensive layered security measures in place considering the volume and importance of data it would contain.

Additionally, a DRaaS would have to perform as intended even if under strain. Network World reported that many organizations are still unconvinced that the cloud could effectively work for disaster recovery. For example, DRaaS involves the constant updating of data, and some worry that too much real-time processing could significantly slow down the service. Also, DRaaS has not yet had to provide relief for many businesses all at once in the event of an outage. While remote disaster recovery has been effective when one cloud had to work with multiple organizations at one time, the service has not been tested under situations in which hundreds or thousands of businesses need to rely on the service all at once.

Would you use DRaaS to back up all of your data, or would elect to stick with Windows system restore programs or something similar until the issues with DRaaS can be effectively mitigated? Leave your comments below to let us know what you think about this service!