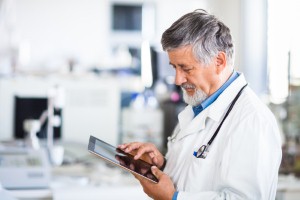 Mobile devices such as smartphones and tablets have become increasingly popular of late – for example, the Pew Research Center reported in November that approximately 45 percent of the adult population in the United States owns a smartphone – and mobile device proliferation has impacted just about every sector of our lives. That is particularly true in regard to healthcare, as two recently released studies found that mobile devices are forever changing the way patients are diagnosed.

Doctors <3 txting
The common stereotype of a text messaging addict is a teenage girl, but one report indicates that doctors also love sending and receiving texts. According to a survey conducted by the University of Kansas School of Medicine-Wichita, more than 50 percent of doctors said they send and receive work-related texts, including when they are not on call, the Wichita Eagle reported.

While cellphones can be a convenient way for doctors to quickly and easily communicate with other healthcare professionals, it can potentially expose an organization to issues should any data be leaked. After all, there have been 635 data breaches involving more than 14 million records at healthcare and medical organizations since 2009, according to Privacy Rights Clearinghouse.

Medical professionals are aware of the threats related to texting, as 46 percent of those polled said they are fearful of running afoul of the Health Insurance Portability and Accountability Act (HIPAA), the U.S. law dictating the standards providers must take to protect patient data. The Wichita Eagle reported that approximately 33 percent of the survey’s respondents said they have received patient information in a text message.

To allow for the easy sharing of information via a text while also ensuring the maximum amount of layered security, Stephanie Kuhlmann, pediatric hospitalist and assistant professor of pediatrics at the KU School of Medicine-Wichita, told the newspaper that healthcare providers should be sure to encrypt all information.

“Hospitals probably need to be looking at encryption software for their institutions,” Kuhlmann told The Eagle. “Many already have it for e-mail, but it seems a small number of places have it for text messaging.”

Patients supersede doctors with cellphones
Healthcare providers are not the only ones increasingly turning to mobile devices in patient care scenarios, as more and more patients themselves are using cellphones to receive medical advice. According to a November report from the Pew Internet and American Life Project, the number of American cellphone owners who use their mobile device to find medical information has increased from 17 percent in 2010 to 31 percent this year.

The study found that the groups most likely to use a mobile device to look up medical information include people between the ages of 18 and 49, African Americans, Latinos and Americans with a college degree. In addition, 40 percent of those polled who have faced a medical crisis and 41 percent of people who experienced a significant change in their health said they turned to a cellphone for medical information.

Will smartphones ever replace doctors for diagnosing ailments and providing medical advice? What can healthcare providers do to ensure that patient data remains secure in an era of increased mobile device usage? Leave your comments below to let us know your thoughts about cellphones and their effect on the healthcare industry!