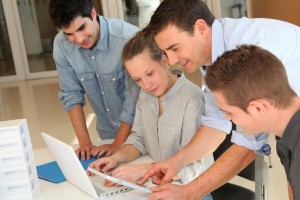 In order to better prepare pupils with the skills needed in the rapidly evolving technology marketplace, universities across North America are putting a greater focus on computer science education and on arming students with the latest tech-related knowledge and tools available.

The world of technology is dramatically changing how every sector and industry conducts business, and that is especially true of universities. Learning on the average college campus has shifted from taking place in large lecture halls and libraries to computer labs and via online classrooms. In order to better prepare pupils with the skills needed in the rapidly evolving technology marketplace, universities across North America are putting a greater focus on computer science education and on arming students with the latest tech-related knowledge and tools available.

New partnership for boosting enrollment rates in computer science programs
To make sure there are enough computer science professionals in the years ahead, the National Science Foundation last month awarded a $6.24 million, five-year grant to the University of Massachusetts Amherst and the Georgia Institute of Technology. The funds will go toward the Expanding Computing Education Pathways (ECEP) Alliance, a new collaboration that seeks to improve best practices for educating young people about computer science and technology in elementary schools, high schools and universities.

According to Georgia Tech, the program will look at previously existing models of teaching to see if a format exists that can be used in other schools in the United States to make computer science more appealing to young people.

“Computing is the world’s newest great science,” Mark Guzdial, Georgia Tech School of Interactive Computing professor and one of the people helping to spearhead ECEP, said in a November statement. “Yet, even though enrollments in U.S. computer science programs are on a four-year rise, it’s still not enough to satisfy the workforce demands of a technology-driven global economy. This new collaboration will drive the discipline forward, enabling states to replicate recent successes in Georgia and Massachusetts that enhanced computing education, grew the pipeline of interested students, and facilitated systemic change to the educational system.”

The program will seek to build on the previous success of a joint collaboration between the two institutions that brought a large number of high school students in Georgia and Massachusetts into college preparatory computer science classes. The ECEP initiative will start off working with pupils and teachers in South Carolina and California.

Ivy League university puts greater emphasis on tech education
In order to better prepare its engineering students for the working world, Columbia University recently changed its course offerings so that pupils in the School of Engineering and Applied Science now have to take a Python programming course. In addition, the Columbia Spectator reported that the school wants to encourage greater classroom computer usage and training among its future engineers by adding five new optional courses.

“I suspect most of the students will take computer science courses with these [new electives],” said professor Adam Cannon, the computer science department’s associate chair for undergraduate education, according to the Spectator. “However, if a student knows that they are going to be applying to grad school in physics or medicine or something else, then they have the opportunity to hit the ground running in that field by taking up to five courses in that area.” He added that “at the end of the day, we think that we’re providing a really solid foundation in computer science and then giving students the opportunity to decide where they want to go from there.”

The news source reported that students enrolled in other programs at Columbia are also clamoring for more classroom software and computer learning, but some recent engineering graduates said that the new courses may not go far enough in regard to providing the skills they need in the workplace.

Are schools and universities doing enough to encourage computer science education? What computer skills should colleges teach to students in order to adequately prepare them for the working world? Leave your comments below to let us know your thoughts on the current state of computer education in North America!