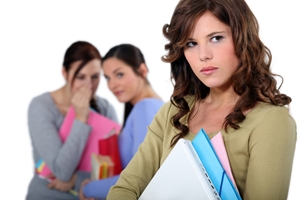 Cyberbullying is a growing problem, especially for teens.

Cyberbullying is a complicated issue. While most schools, parents and teens agree that it’s a problem, it’s not as clear how it should be dealt with. Is it the responsibility of students, parents, schools or social media websites? How can different groups work together to overcome it? What methods are being used to prevent and deal with cyberbullying?

We’re going to examine this issue in a few different posts over the next week. In this first post, we’ll talk about how students are responding. But before we get started, it’s important to realize some things about cyberbullying:

​The good news is that a lot of teenagers (68 percent) – the group at highest risk for cyberbullying – agree that it is a problem. But the data indicates that they don’t really know how to deal with it. A lot of kids ignore cyberbullying when they see it, many don’t report it and some actively defend the person being bullied. So how do we teach kids, spread awareness and get more of them to protest this kind of behavior rather than getting involved in it?

​This kind of awareness campaign will definitely help to address part of the problem. But we’ll talk about other ways cyberbullying could be dealt with in our next post about the topic.

What do you think students could do to help prevent cyberbullying from occurring to themselves or others? Please share your thoughts below or comment on our Facebook page!