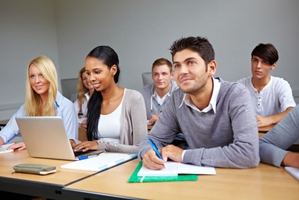 Should schools be involved in policing what students do outside of the classroom?

In our previous two posts about cyberbullying, we talked about how it impacts students as well as parents, and what they’re doing about the problem. But one of the more complicated sides of the equation is how schools should get involved. The issue boils down to this question: Are educators responsible for monitoring student behavior outside of school?

There’s been a lot of debate about this issue and whether it’s fair to get schools involved. But if the students being bullied and doing the bullying are all attending the same school, then it seems inevitable that some of the problem will leak over into class time or occur on school property. The effects of cyberbullying can also have a huge impact on how kids relate with each other in classes, how they perform and their involvement in after-school activities.

How should schools handle cyberbullying?
Currently, educators don’t have the ability to punish students who are guilty of cyberbullying. While schools can help get conversations started between parents and students, they can’t force students to take down content that may be offensive or harmful to another student. Basically, they can act as moderators, but their hands are tied when it comes to taking action.

That might soon be changing. Some states are considering legislation that would allow educators to regulate and punish bullying or harassment – even if it doesn’t take place at school, but on a site like Facebook or Twitter. In Iowa, the governor’s Bullying Prevention Summit, held last November, developed a proposal for a new law that would allow teachers to punish bullies and help victims.

“Creating a caring environment at school is important for every student’s well-being,” explained Iowa Governor’s Bullying Prevention Summit website. “It affects how successfully youngsters can focus on learning as well as the other skills they need to develop to make the most of their potential and to be good citizens.”

Some schools are concerned about being asked to police or monitor out-of-school behavior, but Governor Branstad said that for the most part, school administrators have supported the new idea.

“One of the reasons is they feel under their present bullying law, they don’t have authority to deal with threats made against the lives or well-being of students that might be made on social media,” said Branstad. “So they want to have that authority to be able to protect a student that might be threatened.”

In New Zealand, the government is proposing something even more extreme: Allowing teachers who suspect a student of cyberbullying to search their smartphone and laptop for evidence of inappropriate activity. While some support this new law, a lot of schools, parents and students are concerned about the potential for violation of privacy and whether this is a role that schools should be thrust into.

Getting schools involved
While the role of schools in cyberbullying is still being worked out, there are ways that schools can get involved in incidents now. Larriann Curtis, who is the parent-education programming chairwoman for the Texas PTA, advises parents to talk to schools when cyberbullying occurs instead of confronting the parents of the bully face-to-face.

Some other things that parents can do include:

Some schools that want to be proactive in preventing cyberbullying – or that have dealt with the problem – may also want to introduce an educational program about cyberbullying to help students, teachers and parents understand how to prevent it and deal with it.

What role do you think schools should have when dealing with cyberbullying? Please let us know by sharing your thoughts below or on our Facebook page!