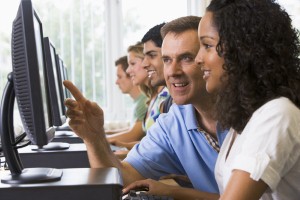 Earlier this month, close $10,000 worth of classroom computer equipment was stolen out from a building on the campus of Kansas State University.

When students at Kansas State University left campus in early November for fall break, they likely may have been primarily concerned about completing an upcoming paper or studying for a big test. However, when some Kansas State students came back to campus on November 18, they were met with a rude surprise.

During the autumn break, close $10,000 worth of classroom computer equipment was stolen out of Seaton Hall from students enrolled in the university’s College of Architecture, Planning, and Design, according to The Collegian, Kansas State’s independent student newspaper.

While the university took precautions to make sure the computers in question were adequately secured – each classroom computer was tethered with a lock cable, and each of the six devices taken were stored in separate locked rooms – the measures were not enough. Benjamin Wagner, a senior at Kansas State, told The Collegian that the loss of the notepads is staggering for students who rely on technology to complete coursework and to store old assignments.

“The loss of intellectual property is significant,” Wagner said to the newspaper. “The amount of work on these computers, the time we invest, is huge. We back up the work from time to time, but that’s more of a way to guard against computer failure than theft.”

Did the university do enough to protect student assets?
University officials and campus police contend that the security measures they had in place were adequate in protecting the technology that students rely upon. One Kansas State official told the news source that he is “dismayed” about the theft, and campus police said they are doing everything they can to find the perpetrator and track down the missing computers.

However, Wagner told the news source that the police officers in charge of the investigation seemed somewhat flippant about the severity of the loss, suggesting that because each of the computers was physically small they were not important to the students.

“Frankly, they didn’t really understand how a computer is so central to our education,” he said to The Collegian. “I didn’t feel like [the officer] had a grasp of the magnitude of the loss.”

According to Privacy Right Clearinghouse, the Kansas State incident is not an isolated case. Since 2005, there have been 172 instances of physical data loss and portable device theft, which have resulted in the exposure of more than 1.2 million files containing sensitive personal information.

Did the university do enough to prevent the theft from occurring? What else could Kansas State have done to better safeguard students against theft and physical data loss? Leave your comments below to let us know what you think about this incident!