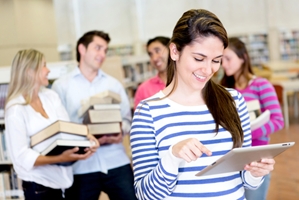 A cash-strapped California school district recently became the beneficiary of a generous federal grant, and officials say they are planning on injecting that money into technology upgrades. The New Haven Unified School District was awarded $29.4 million from the U.S. Department of Education’s Race to the Top-District competition in December, allowing it to invest in advanced educational equipment.

Although officials plan to apply the funds toward a variety of improvements, including upgrading library facilities and hiring additional teaching staff, the school district intends to invest a portion of the grant money toward updating its schools outdated technology, including replacing and supplementing existing classroom computers with newer models.

A full scale technological upgrade is planned, as officials intend to outfit schools with a vast inventory of laptops, cameras, and tablets. To help ease the transition into its high-tech future, the district will hire additional staff to train current educators on their new teaching resources as well as onsite technicians to correct any hardware or software problems. According to the Union City Patch, district superintendent, Kari McVeigh has also explored options for acquiring enough mini-computer tablets to provide one for every middle and high school student. McVeigh expects the first technology upgrades to occur as early as the current school year.

New Haven United was one of 16 districts awarded funding through the Race to the Top federal grant, finishing second overall in the nation. The program, which started in 2009, evaluates districts based on their ability to self-analyze and implement reform strategies to improve their schools. The stated criteria for consideration include developing better systems for measuring student progress, establishing more rigid standards for academic excellence and a showcasing clear commitment to improving poorly performing schools.

The grant money could not have come at a better time for the struggling school district. New Haven Unified has dealt with dwindling funds in recent years as the California government continues to slash the state budget.

According to the San Jose Mercury News, McVeigh said, “It won’t help us overcome all the financial challenges that we’re facing after five years of state budget cuts, but it certainly will help us continue the good work we’ve started here”.

Are New Haven Unified’s proposed technology upgrades a good use of federal funds? Could the grant money be allocated to better resources? Tell us what you think in the comment section below.