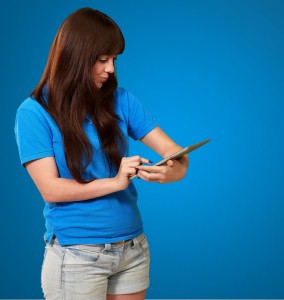 Apple thinks that its tablet can help school districts save money in the long term while also providing children with the skill sets they need to succeed in the classroom and beyond.

Books and the printed press are slowly becoming a thing of the past, and one giant in the technology marketplace is targeting schoolchildren to make sure that happens sooner rather than later.

Apple’s plan to have more kids use iPads instead of textbooks is not diabolical, as the company thinks that its tablet can help school districts save money in the long term while also providing children with the skill sets they need to succeed in the classroom and beyond.

For example, MIT Technology Review reported that one of the hundreds of schools that have recently obtained iPads for students is Barron Park Elementary School in Palo Alto, California. Among the benefits offered by the portable classroom computer, greater intellectual independence and the ability to use multimedia tools such as video editing for school assignments have provided significant learning advantages.

“It’s simply amazing to see the level of engagement and excitement with the children,” educational technology teacher Smita Kolhatkar said to Technology Review.

The news source cited statistics from IDC which found that a majority of the 11 million tablets sold to enterprise organizations and government agencies this year were for schools. In addition, Apple reported that during its third fiscal quarter, about 1 million iPads were sold to school districts. And that number may rise further in the coming months and years due the release of the smaller iPad mini in October, which is expected to have great appeal among educators.

Apple is increasingly in the classroom software market as well. MIT Technology Review reported that the business’s iBooks Author software, through which publishers can create and distribute electronic versions of books and other texts, is used in more than 2,500 classrooms and is available in close to 80 percent of districts in the U.S.

“With iBooks, learning will be a lot more experiential,” Marita Scarfi, digital marketing agency Organic’s CEO, said to Wired. “Other benefits include more timely and relevant content, and the ability for students to interact and share this content with ease. Textbooks will now become social in a variety of ways.”

Importance of a classroom management system for tablets
While the proliferation of iPads and other tablets in primary and secondary schools does present enormous educational opportunities, it could leave districts in a lurch when it comes to cybersecurity.

By adding more endpoints, especially through internet-enabled devices, a school is increasingly its likelihood of being hacked or exposed to malware. After all, Privacy Rights Clearinghouse has reported that there have been 662 data breaches involving educational institutions since 2005.

And if educational facilities are anything like businesses, then they may not be doing enough to secure tablets. According to a recent survey from Ernst & Young, only 40 percent of organizations use encryption to protect data stored on mobile devices, even though roughly half of the enterprises polled use iPads or another type of tablet, FierceMobileIT reported.

The survey also found that 38 percent of companies have done nothing to deal with the potential risks, and 63 percent of the organizations polled said they have no framework in place to handle security-related issues, according to the news source.

“The proliferation of mobile devices in the workplace will continue to challenge chief information officers and IT staff in terms of support and security,” FierceMobileIT’s Fred Donovan wrote in a November 8 article. “Apparently, enterprises have yet to fully grasp the security implications of allowing employees to bring their mobile devices to work.”

If you were a school administrator thinking of replacing every classroom computer with a tablet, would you choose the iPad? In terms of classroom management strategies, are districts better served by the iPad or by Android-powered devices? Leave your comment below to let us know your thoughts on the latest tablet-related trends!