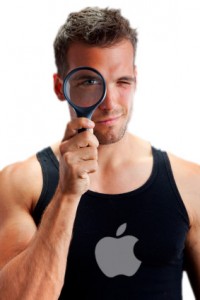 As a PC user I’ve grown used to abuse from Mac users.

When my computer breaks (which is often), I hear the expected “You should have got a Mac.” I admit most of the time they have a valid dispute. However I didn’t expect the same response when I spilled water on my PC last month. Apparently Macs don’t suffer water damage?!

Well, they do. In fact some may even argue it’s even worse because Mac keyboards are more expensive to repair.

Here are three other myths about Macs I uncovered:

We hear this all the time. However, Apple doesn’t make cheap, low-end laptops. A Windows laptop with similar specs to a Mac typically has a similar price.

Despite the popular opinion, Macs DO get viruses. In fact, all operating systems are at risk. Because most computers run Windows, malware creators have the potential of infecting more computers if they target Windows machines.

Just because you are using a Mac doesn’t mean you can’t still run Windows! In fact, many popular programs such as Adobe InDesign and Microsoft Office are available for both Windows and Mac. Also, if you have a program that doesn’t run on the Mac, you can still run it on a Mac virtualization software.

What Mac myths have YOU discovered?