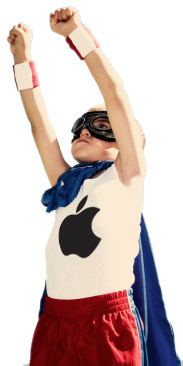 You’d be shocked to know Mac OS X isn’t more secure than Windows. It goes like this — the only reason the Mac doesn’t have virus problems is because criminals who write viruses don’t care. Not enough users—bored now!

Windows users think this is cool—you know since having hundreds of thousands of viruses to deal with is a badge of honor. Something only the cool OS kids deal with. Heated debates on this topic can be found in forums and news article comments all over the Internet.

This debate can’t be won as both sides will never agree on one fact—there are very few computer viruses in the wild that target Mac OS X users. That doesn’t leave Mac users safe though. You still have to be cautious. Here are some tips for being a safe and secure Mac user.

Mac OS X is not secure—any coder can make a program that says it’s one thing but does another. Think you’re downloading Solitaire? Ha! While you stack up cards your keystrokes are getting logged and uploaded to a cybercriminal’s server. That’s how Trojan’s work. It’s not a virus, it doesn’t reproduce. Who cares how secure your OS is.

Rogue anti-malware software has plagued Windows users for several years. They’ve just started popping up on Mac OS X. Maybe you’ve heard of “Mac Defender” (aka “Mac Protector” circa May 2011). It downloads itself from malicious websites, usually attached to pictures. Once installed you get “you’re infected!” warnings and prompts to remove the infection for a fee. Don’t be fooled! This is a scam.

In early 2009, some Mac users downloaded Apple’s iLife ’09 from pirated software sites. Little did they know that the files had a Trojan hidden inside! Oops. The Trojan opened a backdoor that could send and receive info to a hacker’s server. Had you downloaded from a legit source, you would have been safe.

Later versions of Mac OS X prompt the user the first time you run a new app. You can “Show Web Page”, “Cancel”, or “Open”. When in doubt, choose “Show Web Page” to visit the site it came from. If a site like “http://www.davespiratedsoftware.com” loads, chances are pretty good that it’s bad news all around. Abort!

If an app asks for your admin password when installing, ask yourself why. Most Mac applications download as a file that you run without entering any privileges. If Solitaire needs an admin seal of approval, all sorts of warning bells and whistles should sound.

What would need admin rights? Trojans. Malware. Big Bads. Some programs will need those rights but be thoughtful of what those would be. If unsure, Google it.

Stay tuned for next week’s summary!