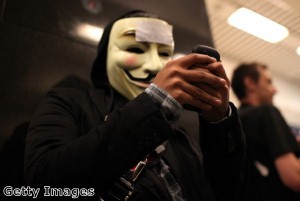 Anonymous has taken an interest in Quebec students’ protests.

Hacktivist group Anonymous is at it again! Students protesting increased tuition fees in Quebec have gained multinational attention for their efforts, and now the hacker group known for shutting down the websites of huge corporations and government agencies has made its position known. The group is (surprise, surprise) not on the side of the government.

A new law restricting protests has poured fuel on an already blazing fire. The new law outlines requirements that must be met to have a government-sanctioned protest. It requires organizers to give eight hours notice before an event, and include details such as where the protest will be held, any travel routes and the duration.

Despite the law’s intention to reduce the chance of chaos, a protest on May 20 that was quickly deemed illegal by Quebec police took a turn for the worse. Protesters ignored the police declaration and showed their discontent by throwing objects at officers and climbing on top of police vehicles. Although no serious injuries (or worse) were reported, police made 110 arrests throughout the night.

Shortly after the chaos, Anonymous expressed support for the students by making videos denouncing the new law and increased tuition. The group also issued a warning directed toward government officials. In one of the videos, the group states, ““Resistance is futile. The hour of war has come.”

While websites for Quebec’s Liberal party and Education Ministry were taken down, Anonymous did not lay claim to the cyberattack.

C.L.A.S.S.E., one of the student associations responsible for organizing the protests, said it would continue to support unsanctioned events, according to the Canadian Press.

“The special law won’t kill the student movement,” spokesman Gabriel Nadeau-Dubois said at a news conference on Monday. “The fundamental rights under threat today need to be defended.”

In addition to indicating more events would be underway, the group staged a more symbolic act of protest by creating a website and encouraging student activists to post photos of themselves on it. The website’s name translates to, “someone arrest me.”

Freedom of speech is a hot issue just about everywhere, so what do you think about Quebec’s attempts to manage its protests? Do you think Anonymous is taking a principled stand, and does its support hurt the students’ cause? And what do you think of technology’s role in mass movements like this?