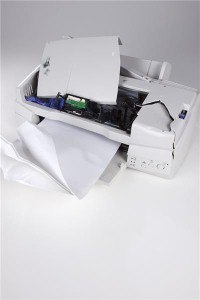 Don’t let your printer be attacked by dangerous viruses.

Application control and whitelisting help prevent viruses from harming a computer or network, but a recent incident suggests that there’s no telling what could be next in the realm of viruses.

PCWorld reports that a new virus called Trojan.Milicenso causes a printer to print full pages of garbled data. The SANS Internet Storm Center reported that bomb attacks involving printers had these machines automatically printing what seemed to be contents of files.

“There have been several reports now of PCs on the network printing what looks like an executable to a large number of printers,” the SANS Institute’s ISC blog said. “Several scanning tools will cause this kind of behavior, but in the instances I know of these tools were not being used on the network at the time. The various AV products aren’t great at picking this up, yet.”

The blog said that if this happens to a network, companies should look to take it offline for further investigation and re-imaging. PC Magazine said that in this instance, the printing seems to be an unintended side effect of the infection.

“This time it was an accident, but malware could definitely do it on purpose,” the news source said of this printer malware attack. “Threats that need widespread propagation need to fly under the radar, so it’s not likely we’ll see thousands of victims. But a targeted attack or a remote-controlled subtle attack like Flamer could definitely do damage to its victim institution. What if it printed all-black pages to use up your paper and ink?”

PCWorld said users who think they are affected by this malware should scan their computer with security tools that are able to get rid of Aware.Eorezo and the aforementioned Trojan.Milicenso to make sure they can get rid of this bug for good.

Have you seen this kind of strange activity or malware on your own printer? Do you even think about how malware could affect hardware like printers? Leave us a comment and let us know how you are protecting your computer and printer.