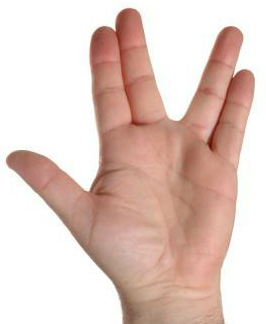 Calling out all you Trekkie fans out there. As I’m sure you already know, today is a day to celebrate! Well if you’re a Trekkie fan you do. Today is the 51th pre-anniversary of first contact! When humans make contact with our first alien species—the Vulcans! …Everyone who isn’t into Star Trek, you’re probably thinking about some place down in New México (I’m not!).

First contact has been mentioned in Star Trek over time, and finally featured in the 8th film titled “First Contact” in1996. What makes it so memorable? Well it depicts how a man named Zefram Cochrane created humanity’s first warp-capable vessel, the Phoenix. After the launch of the Phoenix, Zefram attracted attention from a close Vulcan ship that later landed. This created the first contact and the foundation of Star Fleet and The Federation of planets.

So what’s the moral of the story here? Personally, I think it’s a great time to reflect on how we can achieve greatness in innovation. Zefram’s inspiring words have stuck with me, “Don’t try to be a great man, just be a man. And let history make its own judgments”. Sure he said it in 2073, but it’s some we should all remember, live, and dream.

Knowledge is power and harnessing technology to achieve new heights is brilliant. There are a few great innovators among us and surely more to come. Apple comes to mind here. If Zefram can excel humanity into the galactic arena, as a man who launched the first vessel to ever hit warp speed into space—playing “Magic Carpet Ride” I might add—just think of what you can do!

—Written by Justin Smith, IT Administrator. Justin is Faronics’ IT superhero, saving the day more times than Kirk, Picard, Sisko or Janeway ever has!
About The Author