It wasn’t that long ago that the two major necessities for freshmen dorm rooms were a television and a mini-fridge. Now the world has gone high tech, and dorm life has too. Students living on campus could easily have multiple devices on them at any given time. They might not all be for educational purposes, but they all do have one thing in common—they all need high-speed internet. As students arrive on campus armed with their wide array of smartphones, tablets and laptops, campus IT departments have been scrambling to keep up with the increasing bandwidth needs. Sure they can just get more bandwidth, but who’s going to pay for that?

What’s sucking up the juice?
According to  “2013 State of ResNet Report” tablets account for the biggest drain on network operations in school residences. Here’s how it all breaks down: 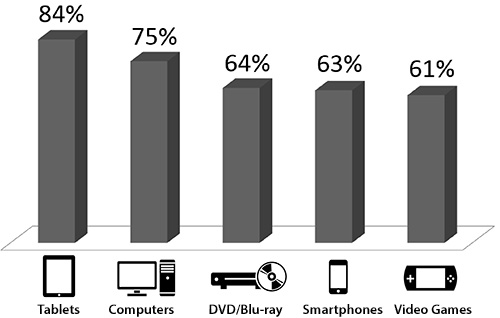 That’s a lot of bandwidth, and it doesn’t come cheap. Sixty-one percent of universities expected the cost of providing high-speed internet to its residence halls to increase over the next two years. Yet only 39 percent said their networking budget would increase in that same time period. The question becomes, how are universities going to pay for all of this extra bandwidth?

Who gets the bill?
Is it university, students or vendors that need to step up and cough up the costs? Here’s what survey respondents suggested:

Don’t like any of these options? Well there’s always the “solution” of raising tuition. As unpopular as that is, it does happen. Just recently, administrators from Wisconsin’s Weber State University announced they would increase tuition to meet increasing bandwidth demands. What else could be done? Maybe administrators could give out more bandwidth to only those who really need it. Universities can make better use of their resources by shifting more access points to residence halls with greater bandwidth needs. This way, campus IT departments can get more out of their limited resources. But then who decides who really needs it?

Who do you think should pay for providing resident halls with high-speed internet connections? Tell us what you think in the comments section below or message us at our Facebook page!