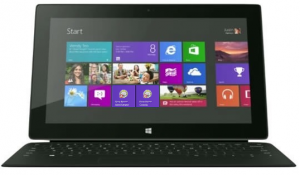 The new Surface Pro from Microsoft goes on sale this weekend (February 9th) but the reviews from industry pundits are already in. While Microsoft no longer gets the cult-like love that Apple automatically draws, there were some very positive comments out there.

Harry McCracken of Time magazine commented that with the keyboard cover and wedge mouse, the Surface Pro’s price point put it squarely into MacBook Air or Ultrabook territory. David Pogue of the New York Times agreed that for the same price you could buy a laptop but he also had this to say: “the Surface Pro does things most laptops can’t do. Like it weighs two pounds, with touch screen. Or work in portrait orientation, like a clipboard. Or remain comfortable in one hand as you make medical rounds, take inventory or sketch a portrait. Or stay in a bag as it goes through airport security (the TSA says tablets are O.K. to stay in).”

The other things that reviewers really liked about the Surface Pro were:

However, here at Faronics, I think the feature that we love best about Microsoft’s new Surface Pro is that it’s the first tablet that runs our iconic Deep Freeze software.

Faronics Deep Freeze 7.6 was released with support for Windows 8 which meant that it can fully protect any PC that runs Windows 8. We just received word from our friends at Microsoft that they have tested DeepFreeze on the Surface Pro and it’s been keeping their tablets protected with no problems.

So go visit your local Microsoft store or Surface kiosk this weekend and take the Surface Pro for a test drive. You can put it through it’s paces and decide for yourself if this is the tablet you’ve been waiting for. Remember, if you end up purchasing one, make sure you get a copy of Faronics Deep Freeze to keep it in showroom condition.