System maintenance is of crucial importance to all the users who want to keep their PC in a secure state. When there are repetitive instances of system malfunctions or crashes during high productivity hours, it becomes very difficult for the end-users to manually troubleshoot and rollback computer to a desired working state. Most Windows users end up trying multiple troubleshooting options to rollback PC to a working state, but such attempts often go in vain because they need significant IT intervention for successful results.

Most of the traditional troubleshooting alternatives to rollback computer to a desired workable state are either time consuming or require IT support to execute or both. This leads to extended downtime and affects productivity. A robust rollback software solution that can reset the state of your system after every reboot can ensure 100% system availability.

Deep Freeze: A Robust Rollback Software for PC by Faronics

Deep Freeze preserves the pristine state of the system and helps end-user to rollback computer to its original baseline settings with a simple restart. This potent rollback software not only ensures 100% workstation recovery after every restart, it also provides bulletproof system security and license compliance. Be it a single workstation or multiple systems connected over a server, Deep Freeze is an effective Reboot to Restore Software for all your requirements as it helps rollback computer to its desired frozen state instantly. 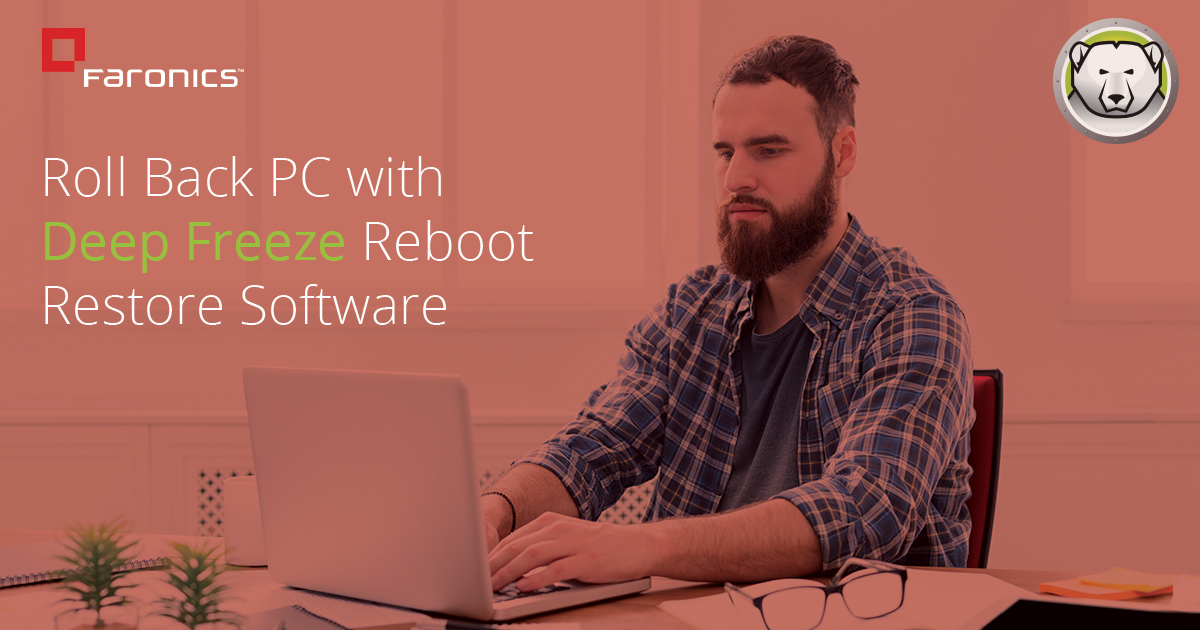 When Deep Freeze is deployed on the system, it helps the end-users and IT administrators in recovering the workstations from potential issues and malfunctions. Furthermore, it eliminates all unauthorized changes with each reboot, while providing the end-user with unrestricted access to the system. Deep Freeze does not require any IT expertise from the users to rollback computer to an optimal frozen state. It aids effectively in avoiding the restrictive approaches to system maintenance and helps end-users to rollback PC with a quick restart and resolve system-related issues on their own without relying on IT support all the time.

Windows System Restore Vs Deep Freeze: What is the Difference?

System restore is an useful feature introduced by Microsoft that helps reset and rollback PC to a previous state in case of a system slowdown or malfunction. In addition to the automatic snapshots captured by the system, users can also take snapshots of the desired system configuration manually which can be referenced at the time of running system restore to rollback computer to the preferred working state. These snapshots are also known as restore points.

Deep Freeze not only tops the limitations of Windows System Restore, it also empowers the end-users to rollback computer to ensure complete workstation recovery in diverse IT situations and computing environments.

Mac Time Machine Vs Deep Freeze: Which One Is Better Rollback Software?

Time Machine is an in-built backup utility in the Mac OS. It takes incremental snapshots of everything on a Mac computer at regular intervals and and maintains an up-to-date copy of each and every file and of the state of the system in the past. Time Machine enables Mac OS users to go back in time and rollback the entire system or some specific files at a particular point in time.

However, this Mac-specific feature utilizes the conventional snapshot technique to rollback computer effectively to the preferred working state. In other words, to rollback computer with Mac OS optimally, it takes multiple screenshots of the everything on the system and saves those as backups over an external storage platform. However, such snapshots consume a large portion of disk storage and if the lack of the storage space is overlooked by user, it removes the old backups to save new system snapshots which increases its inability to rollback Mac system to a desired working state during crisis situations.

Deep Freeze drifts away from the snapshot technique of Mac Time Machine and functions at a kernel level to rollback computer instantly from any damage. It preserves the desired baseline state protecting it from any unwanted or unauthorized changes. Such a functionality enables this formidable Reboot to Restore solution to rollback computer to the preferred frozen state even when the system fails to boot up on its own. Moreover, it eliminates the necessity of allocating additional disk storage for storing snapshots, thus making Mac maintenance an easy and simple process for the end-users.

Rollback PC with Deep Freeze: Benefits That You Can Expect

Deep Freeze can rollback computer to a predefined frozen state by transferring user-session data to an allocation table instead of saving them permanently on the system’s hard drive. However, this session data is not referenced and is erased each time the system rebooted, thus helping users rollback PC to its original system configuration. Deep Freeze Reboot to Restore thus facilitates greater IT efficacy, enhanced productivity, and provides multiple benefits some of which are as follows:

Delivering Uninterrupted Field Operations: Empowered by its simple-yet-effective Reboot to Restore functionality, Deep Freeze allows end-users to rollback PC from potential system related problems independently without seeking any tech support. Such restoration capabilities offered by Deep Freeze have led to a remarkable 63% reduction in IT tickets, thus enabling the IT department to have greater efficacy and responsiveness in handling service requests.

Providing Benefits to Both Individuals & Organizations: Deep Freeze rollback software has been widely used by individuals as a unique system recovery and protection solution as well as by enterprises with diverse system requirements.  Deep Freeze enables users to rollback computer to a preferred baseline state very easily and the enterprise version comes with a central management console to ensure seamless operations.

Preventing Configuration drifts: Running equally well on both Windows and Mac OS, Deep Freeze removes all unwanted system changes made by the previous user and ensures 100% workstation protection. It can rollback computer from any sudden configuration drifts or unauthorized changes.

Ensuring 100% Workstation Security: Deep Freeze can rollback computer to its optimal frozen state post every reboot. It’s Reboot to Restore technology helps remove all IT concerns related to system security by safeguarding it against phishing and deadly malware threats. The security features of Deep Freeze can be further enhanced by integrating it with the anti-virus and anti-executable tools.