We’ve all had a friend on Facebook magically post something about a free iPad or clothing and wondered “how is this possible?” Well going back to something my mother taught me long ago “if its too good to be true, it probably is”.  This is exactly what all of these Facebook posts are.  Too good to be true.  Here are some helpful tips to avoid being sucked into a scam and avoid being ridiculed by your social networks. 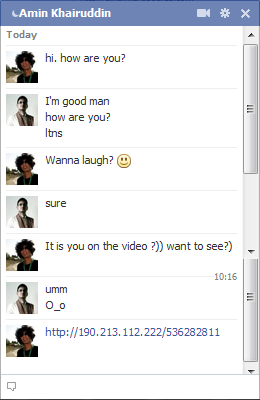 Outlined above is a conversation between a real person (guy in white) and a hijacked account sending a link through.  This link leads to a fake Youtube page again asking for you to update Flash Player.  As seen on kevinfrancis.net the most convincing part are the fake comments below the fake video.