Products:
By Resources:
CASE STUDY
Faronics Deep Freeze and Mobile County Public School System
“We look at it this way—we’re taking our workstations back one at a time, And of course, once they are Frozen, we don’t touch them again unless there is a hardware failure. It has helped our department use our energies toward putting out other burning fires, and not just workstation issues.”
- George Mitchell, Hardware Supervisor , and Lead Technicians John Kennedy, Robert Gray, Heath Parker, Ty Wilson, and Ken Hannon
Challenges faced

Mobile County Public School System has over 20,000 students, teacher and administrator workstations that run Windows XP. There are also 500 file servers that serve the district. Workstations were wide open to viruses, spyware, malware and accidental or malicious software changes. Malicious software changes were a big problem in the high, middle, and elementary school computers and computer labs, causing Mobile County’s work order program to be inundated with service calls.

Mobile County Public School System's IT department deployed Deep Freeze to protect its systems from malware, spyware, and viruses. The major problem of malicious software changes was also resolved with a simple reboot. Students can count on computers being available for their school use, and teachers can focus on teaching in computer labs rather than troubleshooting workstation issues. 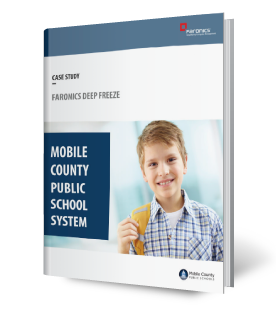 Faronics Deep Freeze and BC Hydro